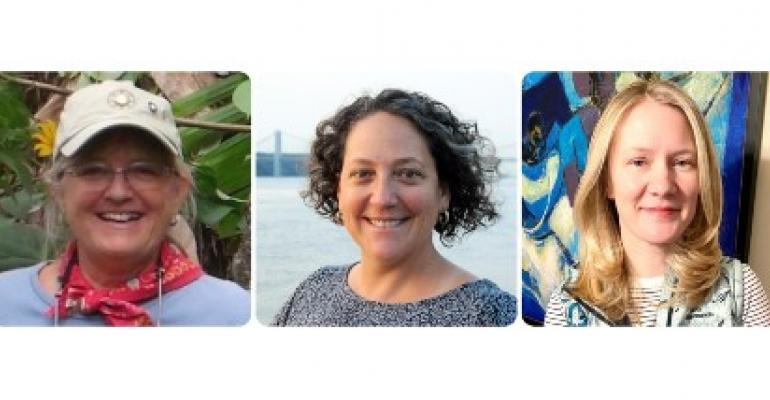 From left, Capt. Lynn Danaher, Dr. Vicki Ferrini and Jenifer Austin
Three women of The Explorers Club will serve as godmothers for Enchanted Princess and appear in an original production, 'Our World, Enchanted' to be broadcast globally Dec. 13.

Princess President John Padgett said this format gives 'Princess fans a more intimate look at our newest MedallionClass ship' and 'allows us to recognize the contributions our godmothers — Capt. Lynn Danaher, Dr. Vicki Ferrini and Jenifer Austin — have made to ocean conservation and stewardship.'

Since its inception in 1904, members of  The Explorers Club have traversed the earth, the seas, the skies and even the moon. This multidisciplinary, professional society is dedicated to the advancement of field research, scientific exploration and resource conservation.

Capt. Danaher has been a US Coast Guard licensed master and dive master since 1994. She is a founding member and president of the Pacific Islands Research Institute and co-founder of the Friday Harbor Film Festival. She has completed eight Explorers Club Flag Expeditions and serves as the club's VP mission programming and chairs the Headquarters Renovation Committee.

Ferrini, whose PhD is in coastal oceanography, is a senior research scientist at Columbia University's Lamont-Doherty Earth Observatory and leads several efforts focused on making sure data are preserved and can be accessed by scientists and the public alike. She joined the Explorers Club in 2021 when she was selected as one of the Explorers Club 50 — 50 explorers changing the world.

Austin spent nearly 14 years at Google, where she co-led the team that launched the first virtual map of the ocean in Google Earth and Google Maps and also launched Underwater Streetview in Google Maps and Global Fishing Watch. She then started Oceanagenda.com to support holistic ocean conservation and stewardship. A fellow of the Explorers Club, she has served on the W40 Women's Committee, speaking as a part of Women of the Deep and hosting a panel in its finale Pathfinders Symposium.

The show will be broadcast at 1 p.m. PST/4 p.m. EST Dec. 13 on Princess Cruises' YouTube channel and Facebook page.