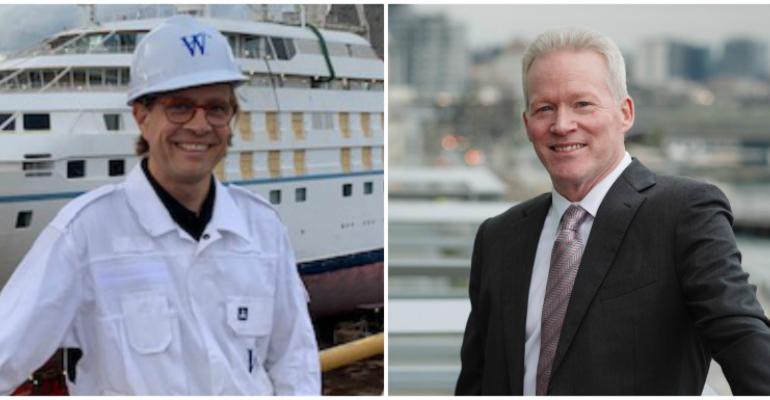 Chris Prelog, left, moves up to COO as John, Delaney, right, leaves Windstar for personal reasons
John Delaney, president of Windstar Cruises since 2016, is stepping down March 4, and Christopher Prelog is moving up.

During an eventful time at the Windstar helm, Delaney has worked to invigorate the brand by telling its small-ship story. He assembled a new team and has overseen numerous product and itinerary changes, most significantly, the $250m Star Plus Initiative to lengthen and modernize three ships.

VP Fleet Operations Prelog is promoted to chief operating officer. Before joining Windstar in 2016, he spent 18 years at Seabourn, where his ultimate role was VP hotel operations and VP entertainment.

And Betsy O’Rourke, chief marketing officer for Xanterra, will lend her expertise to the Windstar brand during this period of growth with the Star Plus initiative. The first of the lengthened vessels, Star Breeze, is due to resume service in May.

O’Rourke is a former SVP marketing at Royal Caribbean International. She left that job in May 2012 and has since been with Xanterra.

Delaney came to Windstar from Seabourn, where he spent five years, ultimately as SVP global marketing and sales.

Before that he held a number of positions at Holland America Line, including VP revenue marketing, director of special projects at corporate audit services and manager of management advisory services. Earlier, he had six years at The Walt Disney Co.