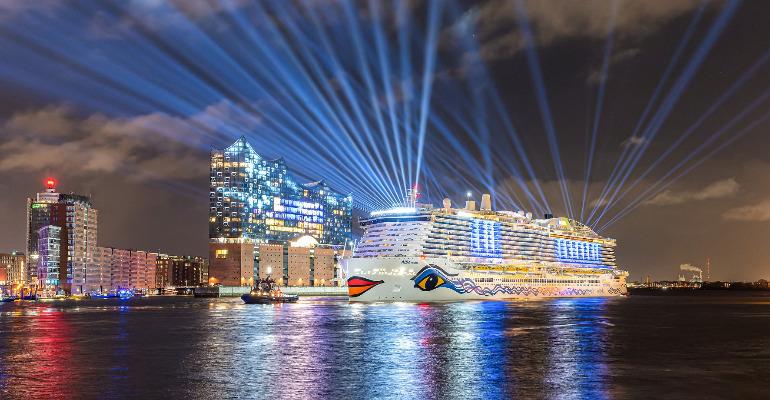 AIDAcosma passes Elbphilharmonie on Saturday night as it sails from Hamburg

AIDA Cruises' newest vessel AIDAcosma was christened Saturday in Hamburg, ahead of its repositioning voyage to Palma de Mallorca that night.

The 3,300 passengers who had already embarked the ship for the two-week sailing attended, along with some 350 guests invited by AIDA especially for the event.

Delivered by Meyer Werft in December, AIDAcosma made its maiden call at the port on February 25.

‘The world is becoming more colourful’

The ceremony's theme was ‘The world is becoming more colourful,’ with German athlete Kristina Vogel as godmother.

The former German track cyclist, paralysed following a crash in June 2018, has two gold and one bronze Olympics medals and is an 11-time Union Cycliste Internationale world champion.

She lit a colourful globe on AIDAcosma's Ocean Deck Saturday evening, at the same time as the wine bottle smashed against the hull. A light show illuminated the skies above Hamburg amid a concert delivered by German DJ Alle Farben.

The light display continued as the ship passed the Hamburg Elbphilharmonie and the Landungsbrücken to Teufelsbrück.

The ship will arrive in Palma on April 23, starting its summer schedule on the same day. Until October 29, it will operate weekly West Mediterranean itineraries calling La Spezia, Civitavecchia, Ajaccio and Barcelona.