Kanazawa Port on the crest of a wave with new terminal 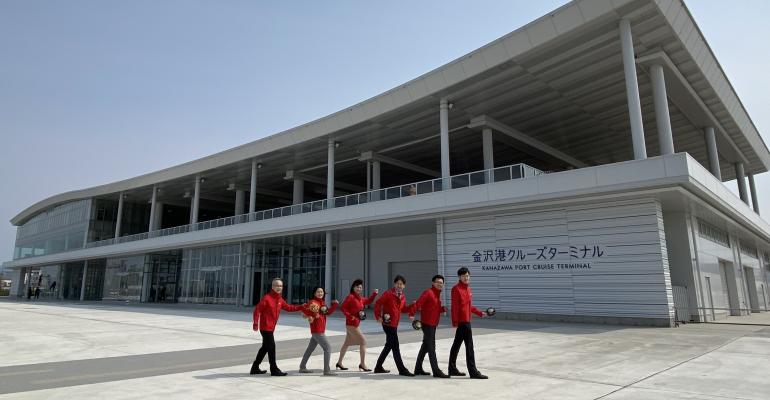 Kanazawa Port, located near the center of Japan, is celebrating two milestones this year:  its 50th anniversary and the opening of the newly built Kanazawa Port Cruise Terminal.

In 2019, Kanazawa had 50 calls, including 20 turnarounds and with the new terminal it aims to be the main cruise hub for the Sea of Japan, Mitsuo Kubo deputy director-general of Kanazawa Port Authority told Seatrade.

The three storey building covers 10,600 sq mtr and is topped with a waved shaped roof.

The ground floor has CIQ (Customs, Immigration, and Quarantine) and waiting areas capable of handling 4,000 passengers inside two hours. Tourist information, a currency exchange machine and Wi-Fi are available. The terminal also offers parking for 400 cars and can accommodate 100 tour buses.

After entering the terminal there are two large ocean-themed pillars each decorated with traditional crafts by local artists. The pillars are also earmarked to become a popular photo stop for cruise passengers arriving to Kanazawa said Kubo.

The floor to ceiling glass walls on the ocean side of the building provide stunning sunset and sea views.

A restaurant on the second floor overlooks the cruise berth and harbour. Each evening after sunset the harbor and terminal are illuminated with the five colours of Kaga Yuzen, a traditional dyeing technique.

Passengers will be able to enjoy the light show from the ship deck, noted Kubo.

The second floor also features a Seminar Room and Learning and Experience Room which is equipped with a Kanazawa Port ship navigation simulator—the largest in Japan, comprised of 14 monitors, each one measuring 70 inches for visitors to practice berthing a cruise ship.

The third floor houses the port offices and services.

The terminal opened the middle of this year but unfortunately we have not had any ship calls yet noted Kubo, however he added, ‘in the past three months 300,000 visitors have come to the multifunctional building which has been designed as an attraction in itself and to be used  for sightseeing and events in the off season as well as when cruise ships are at berth.’