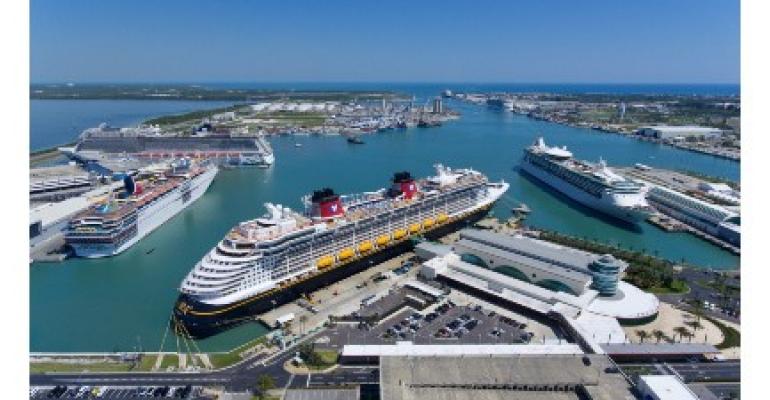 A six-ship day on March 28, 2022, The cruise segment has performed better than expected year-to-date

Port Canaveral's cruise business is performing extremely well, with one week in July hitting an all-time record passenger count, and ship occupancy currently at more than 100%.

This was the backdrop for today's presentation of Canaveral's proposed 2023 budget, which includes a hefty increase in cruise revenues.

2022 cruise occupancy had been forecast at 50% for the first three months of the year and 75% for the last nine months. Currently cruise ships are operating at more than 100% occupancy, port CFO Michael Poole told Canaveral Port Authority commissioners.

Poole said the port is budgeting a 'conservative' 100% cruise occupancy for fiscal 2023, which starts in October.

The port's capital improvement projects are budgeted at $75.5m, including $38m in new projects, of which $14.7m are related to cruise, including elements like passenger boarding bridges, parking, HVAC, canopy replacements and elevators/escalators. Poole said many of those items had been deferred the past two years.

As for 2022 year to date, since last October, the start of the port's fiscal year, Canaveral has handled 674 cruise calls and 3.2m multi-day passengers.

Since July the port has posted six consecutive weeks of more than 100,000 passengers, and the week of July 29 peaked at 120,300 passengers, a new record.

This is due to more and bigger ships. While nine ships were expected to homeport during the summer, that rose to 10 with the addition of Norwegian Getaway, redeployed from the Baltic due to the Russia-Ukraine war.

The port anticipates ending fiscal 2022 with an estimated $122m in revenue, well ahead of the $109m projected, with $10m of that due to better than forecast cruise numbers. All business segments are producing above budgeted revenue.

The proposed 2023 budget awaits approval by Canaveral commissioners at their September meeting.