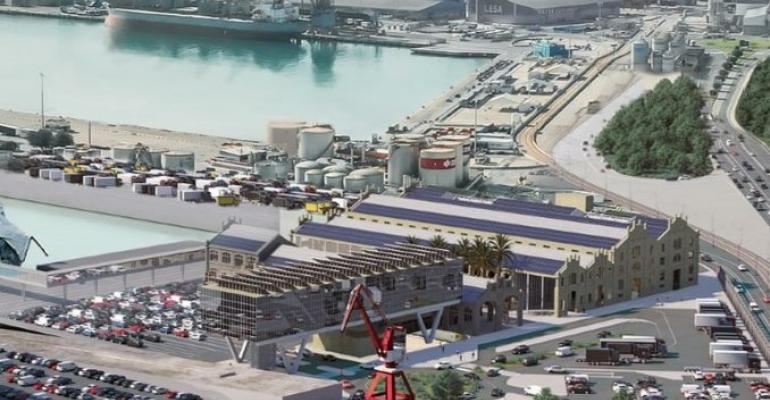 A rendering of the new passenger terminal at Port of Valencia

A tender is to be issued soon for the demolition of the former shipyard in Port of Valencia which will pave the way for the construction of a new passenger terminal and other related cruise infrastructure.

Valued at around €900,000, the work includes the demolition of some of the warehouses and other buildings on the site and the ramp of the north slipway, as well as the dismantling of most of the equipment and installations.

The work also includes the sale of reusable materials, such as bricks, tiles and metal, at an estimated value of more than €400,000.

Located between the Muelle de Poniente and the Muelle Perfecto Palacio in the area previously occupied by the Unión Naval de Valencia shipyard, it covers approximately 100,000sq mtr.

A water tank, the shipbuilding slipway, two cranes and part of building III — all over 100 years old — have been identified as of ‘historic and artistic value’ and will remain as part of the new project.

The new passenger terminal will serve cruise ships and regular services to the Balearic Islands and Algeria, as well as ro-ro traffic.

Baleària Group, partner of Global Ports Holding, has been awarded a 35-year concession to build and operate the new passenger facility, with the option of a 15-year extension.

GPH will operate and manage Valencia Cruise Port while Baleària will invest in the port infrastructure, to include two new terminals, ferry piers, car parking and retail, and F&B areas.

The terminal will be run using renewable energy including solar power and berths equipped with shore power facilities. 100% of the waste it generates (as well as waste from ships) will be recycled in a biomethane plant that will generate biogas.