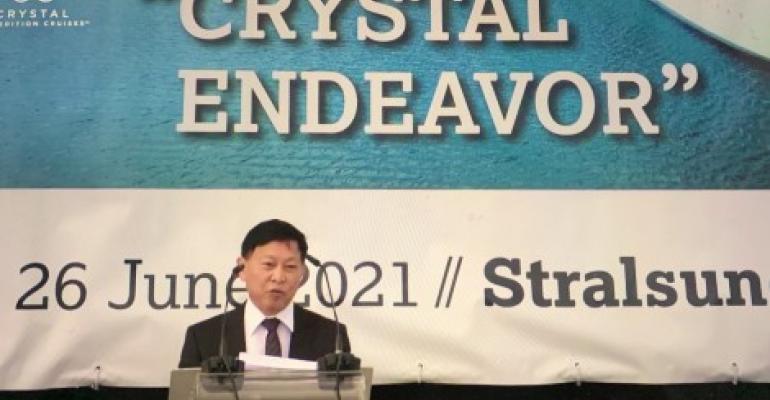 Crystal Cruises will serve as the management company for hotel-branded newbuilds in order to achieve economies of scale in ship and shore operations, Colin Au said

Genting Hong Kong plans to build a series of Endeavor-class and Universal-class ships customized for luxury hotel brands, to be managed by Crystal Cruises.

'Do not wait for demand to pick up so you can build more ships,' Au told the audience, which included German local, state and federal officials, MV Werften management and shipyard workers.

'The way to build more cruise ships is to [make] obsolete the 350 ships that are floating now ... and for regulations to come into place in the next 10 years with new safety features.

'The obsolences of existing ships is the only way the European cruise shipbuilding industry can be revived,' Au said.

The order for a sister of Crystal Endeavor had been suspended during the COVID-19 pandemic, and this was the first time since then Genting HK spoke publicly about plans for continuing the 20,000gt, polar-class series.

Au said that starting in 2023, MV Werften will build Endeavor-class ships customized for luxury hotel brands such as, perhaps, Waldorf Astoria. He showed a video with variations on the design and livery in white, black or blue.

Crystal to manage 'for economies of scale'

'We will be operating these ships by using Crystal Cruises as the management [company] in order to achieve economies of scale in ship and shore operations,' Au said.

Genting just inaugurated its $4.3bn Resorts World Las Vegas and Au said he'd dined the night before with Hilton's CEO and senior management. 'They were very delighted to consider the next Crystal Endeavor 2 may be named Waldorf Astoria Cruise,' he reported.

In 2019, Genting HK announced plans for a new mid-sized series of ships, the Universal class, which it said would be operated by hotel brands, but provided no details beyond size and a planned 2022 delivery.

In another bombshell at Crystal Endeavor's naming, Au said these 2,000-passenger, 90,000gt newbuilds would also be managed by Crystal. The first ship is now planned for 2025.

According to the strategy, they'll be flagged mainly by global hotel brands that have instant name recognition, direct distribution and huge loyalty programs, with the largest hotel companies each having more than 100m loyalty members.

The Universal-class ships will be 'designed like airplanes, where function is more important than form, simplying the design and production process and reducing costs, while allowing for customization by hotel and other brands.'

Moreover, the Universal-class ships have numerous health safety features in the event of future viral outbreaks. They're 'optimally designed for social distancing, with 20% more space compared to comparable ships.'

Cabins can be arranged as a sitting room or dining room during the day — with the video showing a Murphy bed that can be pulled out or retracted into a cabinet.

This is so 'guests can dine in comfort in their own cabin with friends and family, without being in public dining rooms.'

Balconies with UV light for sunbathing

Cabin balconies will measure 1.9 meters deep with space for two lounge chairs and a controllable UV light for sunbathing. With a projected 30% to 50% of passengers expected to choose sunbathing on their private balcony, the sun deck will have greater space, with more room to spread out.

Plus, the ships will have no-touch design, including voice and facial recognition, and Bluetooth and proximity-activated elevators and doors to cabins and public rooms. Surfaces will be coated with titanium dioxide to kill viruses and bacteria through photocatalysis, and UV light will be incorporated into air intake and distribution systems, while there will be one-way corridors and stairwells for social distancing.

Au also said the 208,000gt Global Dream — largest ship to be built in Germany, would be coming in 2022. Completion of that ship for Dream Cruises is part of Germany's financial support for MV Werften.