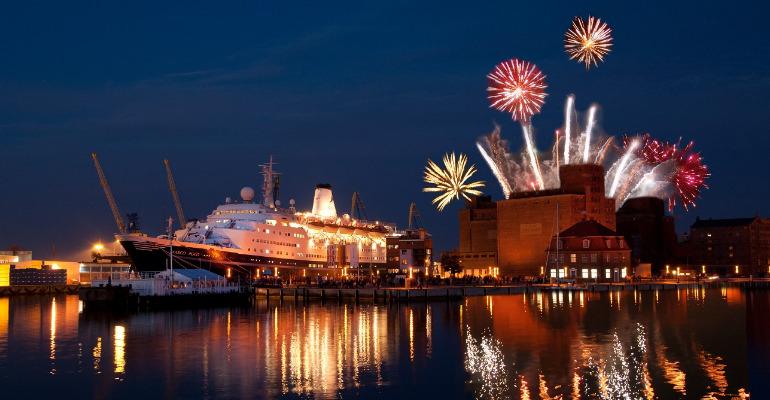 A stalwart calling at the site where she was built: Marco Polo at Wismar on October 10, 2014

Thyssenkrupp Marine Systems (TKMS) has acquired the Wismar site of MV Werften at an undisclosed price, ending the building of passenger ships inside the town after almost 70 years.

TKMS will attempt to convert the Wismar site into a shipyard specialising in the construction of submarines and potentially even naval surface vessels.

MV Werften’s administrator Christoph Morgen confirmed the news on June 10, which has been met with general optimism for ensuring Wismar’s long-term future as a shipbuilding hub.

End of an era

TKMS’ investment brings decades-long passenger ship building at Wismar – an important part of its maritime heritage – to a close.

The yard began making passenger ships shortly after World War II under the socialist economic system of the German Democratic Republic (GDR). In October 1951, the shipyard – which had been established out of several local small shipbuilding ventures – was officially launched as VEB Mathias-Thesen-Werft Wismar. It soon gained prominence for building passenger vessels, delivering a large number of river vessels to the Soviet Union.

Oceangoing passenger ships followed in the late 1950s and in October 1964, the shipyard’s claim to fame came with the delivery of Ivan Franko – one in a series of prestigious ocean cruise vessels referred to as ‘Project 301’ or ‘SeeFa 750’ in Germany.

The series comprised five ships – Ivan Franko, Aleksandr Pushkin, Taras Shevchenko, Shota Rustaveli, and Mikhail Lermontov – delivered to the Soviet state-owned ventures Baltic State Shipping Company and Black Sea Shipping Company between 1964 and 1972. Designed with elegant lines and offering superior comfort for the time, the ships drew attention from within Eastern Europe and beyond. In addition to the vessels’ reputation for quality, the number of ships was groundbreaking for the period; building five sister ships in a row was uncommon in global passenger shipping in the 1960s and for the GDR, it served as the largest series of commercial ships so far.

While there are no Project 301 vessels in operation today, the 1965-built Aleksandr Pushkin sailed for 55 years, ultimately as Cruise & Maritime Voyages’ Marco Polo before it was scrapped last year in India after the pandemic sparked the cruise line’s collapse. Renowned for its quality, the ship has been expected to reach 60 years in operation.

Marco Polo returned to its birthplace for transit calls in its latter years and was one of the ships which helped shape Wismar’s reputation as an upmarket cruise port after the creation of Columbus Cruise Center Wismar in 2012. In October 2014, Marco Polo was celebrated with a fireworks display and a year later, a book was published, ‘Marco Polo - Celebrating Fifty Golden Years of Ocean Travel.’

The ’golden era’ of ocean and river cruise ship building came to a close at Wismar in the 1970s with the 1980s seeing Mathias-Thesen-Werft specialising in other ship varieties, including railway cargo ferries. The shipyard went on to deliver 75,000 folding boats – from kayaks to rowing-, sailing- and allegedly even motor boats – between 1954 and 1990 prompted by the socialist economy of GDR’s advisory for industrial ventures to produce consumer goods alongside its core output. Some of VEB Mathias-Thesen-Werft Wismar’s fold boats were exported and many are still in use today.

With the fall of the GDR, the restructured shipyard temporarily returned to its roots and added to its cruise shipbuilding record. Re-branding as Aker MTW Werft, it delivered AIDA Cruises’ AIDAvita and AIDAaura in 2002 and 2003, respectively, and the hull of Norwegian Cruise Line’s Norwegian Sun was constructed at Wismar for subsequent outfitting at Lloyd Werft Bremerhaven.

Shipyard employees and citizens of Wismar hoped for a revival of passenger shipbuilding when Genting Hong Kong acquired the site in 2016 – a move that instead heralded the end of Wismar’s long tradition for the building of cruise ships.

The fate of the unfinished Global Dream, currently docked at MV Werften’s Wismar compound, is unclear. Though unlikely, it may still be completed at Wismar provided it has a buyer soon. A more likely scenario is that the vessel is prepared for towage locally and then transferred to another yard for completion.

Another option, to scrap the ship, is still on the table if no buyer emerges.

As it currently stands, the vessel needs to be removed from the yard during 2023 at the latest in order to prep the yard for naval shipbuilding.

TKMS will attempt to start building submarines at Wismar in 2024, providing it receives more orders, which is expected.

TKMS will first transform the yard into a production site tailored to naval shipbuilding and hire staff. According to current planning, around 800 staff members will be needed during the run up to production and the eventual workforce could total 1,500 if TKMS succeeds in also acquiring contracts for the building of naval surface vessels at Wismar. Staff will first and foremost be recruited from the pool of former MV Werften staff currently employed by the transitional company established after MV’s insolvency early this year. Former MV Werften trainees will also be recruited.