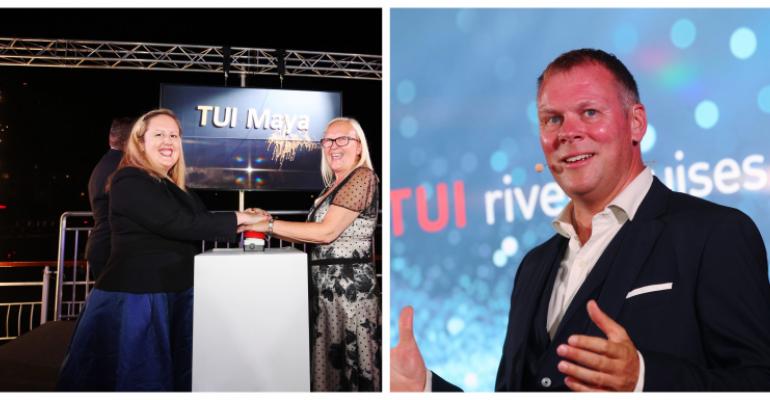 Guests then embarked on an overnight sailing to Boppard to explore the Rhine and then onto Rudesheim.

Chris Hackney, managing director of Cruise TUI UK & I said: ‘We are delighted to finally launch TUI River Cruises and had a fitting celebration to get TUI River Cruises sailing in style.  We’re now all really excited to welcome our first customers on Sunday.

‘People have been impressed by the elegant design and contemporary feel and surprised by how spacious the ship is,’ he added.

TUI Skyla is due to be named and set sail later this year and  TUI Isla will be sailing in 2022.

TUI launched a nationwide search for its godmothers last year and out of 750 applications two were chosen: Rosie Brooks an illustrator from London is Skyla’s godmother and Catherine Hawkins, a college exam officer from Barnsley is Maya’s godmother. Both attended the naming ceremony and pushed the button for the champagne to smash against the hull of TUI Maya and both will also officiate at Skyla’s naming.

The ships have been transformed with multi-million pound make overs and include two restaurants, two bars and deck areas designed to allow for relaxing, wellness and more strenuous activity.

Although the TUI River Cruises brand is new, TUI Group is not a newcomer to European river cruising. A fleet of upmarket river vessels tailored to the German source market operated between 2010 and 2014.