How IAATO operates within the Antarctic Treaty System 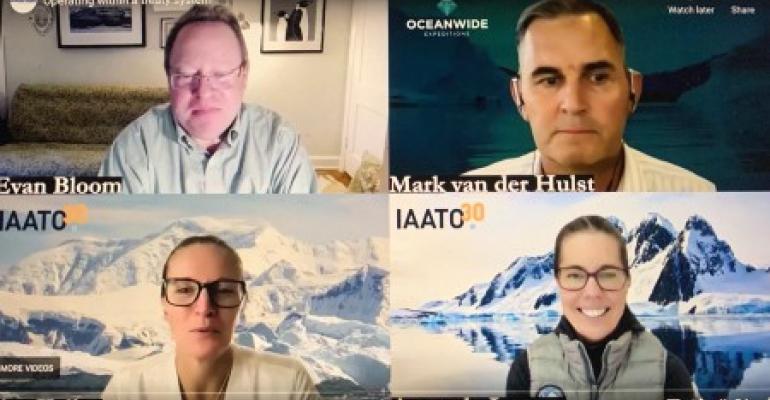 Aspects of the Antarctic Treaty System's Environmental Protocol originated with the International Association of Antarctica Tour Operators being proactive and providing expertise and best practices from their members.

This was discussed during 'Operating Within a Treaty System: Celebrating 60 Years of the Antarctic Treaty and 30 Years of the Environmental Protocol — Powered by IAATO,' part of Seatrade Cruise Global 2.0 Power Week, taking place online Oct. 11-15. Monday's session was moderated by Lisa Kelley, deputy executive director/director of operations and government affairs, IAATO.

It was a great primer on the Antarctic Treaty, its Environmental Protocol and IAATO's work on significant issues.

What is the Antarctic Treaty?

The Antarctic Treaty, signed in 1959 by 12 nations, is a Cold War instrument that demilitarized the continent and froze territorial claims so scientific research could take place, explained Evan Bloom, senior fellow, Polar Institute, Wilson Center, who formerly led the US Department of State's Antarctica policy. The Treaty now has 54 signatories and 28 consultative parties including IAATO.

The Treaty operates on the basis of consensus so all steps have to be agreed without a stated objection. Bloom gave examples of differences such as concerns about permanent tourism infrastructure that might potentially be created in future, safety and, a major issue currently, marine protected areas.

The Treaty's Environmental Protocol, which established Antarctica as an environmental reserve, came in 1991, the year of IAATO's founding by a group of seven tour operators who wanted to use their expertise to create operating standards.

The driving force behind the Environmental Protocol is the Committee for Environmental Protection (CEP), whose main tasks include risks associated with non-native species, responding to climate change and the impact of human activities, which have to be authorized and permitted, said Amanda Lynnes, a scientist who's IAATO's director of environment and science cooperation.

CEP work goes on all year, and Lynnes said revising the general guidelines for visitors to avoid disturbing wildlife and protect the environment was an important project involving IAATO.

Van der Hulst said IAATO is known for achieving consensus, something that's very challenging for the Treaty parties to do.

In 2019, he attended a UK-Netherlands meeting during which Antarctic tourism was a major topic yet van der Hulst was the only participant involved in tourism. It was a chance to address skeptics. He told how IAATO members help conduct scientific research, transport scientists, deliver equipment and often are early adopters of environmental technology and practices. Tour operators can share first-hand experience of Antarctica, he said, while regulators often make decisions behind desks.

Bloom agreed on the relevance of in-field experience, observing that many well-meaning people show up at diplomatic meetings without the depth of knowledge to inform good policy.

Each Treaty country is responsible for implementing requirements and permitting for its tour operators. Van der Hulst said that in the Netherlands, operators must apply for a permit every year, including submitting an environmental impact assessment. After each season, operators report the number of people carried and provide photos of areas visited. They also give input on regulations to inform the Netherlands' viewpoint.

Another part of the Antarctic Treaty System is the Commission for the Conservation of Antarctic Marine Living Resources (CCAMLR), which covers marine protection and fisheries. Bloom mentioned hard-fought economic conflicts over fishing and increasing attention on marine protected areas.

Lynnes, who attends CCAMLR meetings on behalf of IAATO, noted marine protected areas are relevant to supporting climate change mitigation, and the Antarctic Peninsula is one of the fastest warming places on the planet.

'The greatest threat to Antarctica is climate change,' she said. 'But Antarctica also really matters for the climate as well.'

Informing people about climate change can make tourism a force for good, however, getting to Antarctica is 'quite costly carbon-wise,' Lynnes acknowledged, 'so we have to make every journey count. It has to be educational, enriching and immersive and show why Antarctica is worth protecting. We hope every visitor comes back having that moral obligation to shout about why it's important to protect it.'

As van der Hulst put it: 'We bring passengers but take back polar ambassadors.'

Register here for a virtual pass to watch this and other sessions, as well as the entire program from the Seatrade Cruise Global Miami Conference, on demand and to network.