Silver Endeavour shows off its stuff 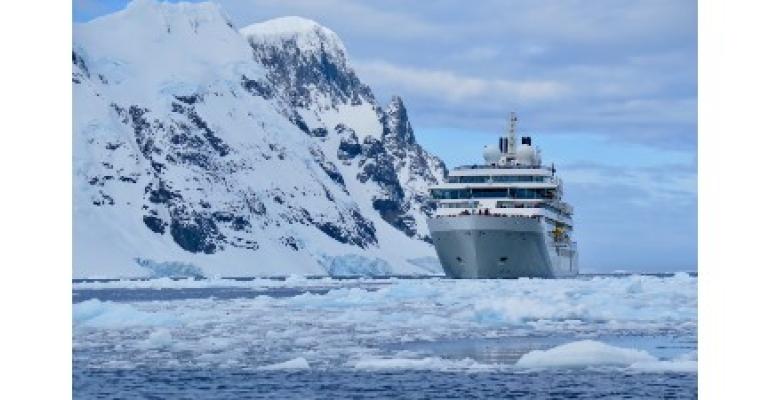 'The inauguration of Silver Endeavour could not have been more successful,' said Silversea's Barbara Muckermann, chief commercial officer, who hosted international travel partners and media onboard. 'The thing I'm most proud of is showing the expedition capabilities of this ship. We managed to offer landings two times a day, used both Zodiacs and kayaks and had the most magical naming ceremony with the Zodiacs and the ship surrounded by a sea of ice.'

Silver Endeavour debuted in one of the world's most demanding destinations, but the Polar Class 6 ship was built for this.

Introduced as Crystal Endeavor in July 2021, the 200-passenger, 20,449gt vessel is believed to be the most expensive ever built at nearly $2m per berth. Royal Caribbean Group was able to acquire it for $275m, with very favorable financing.

Greyhound of a ship

On the shakedown cruise under Capt. Niklas Peterstam, a veteran ice navigator, Silver Endeavour bounded across the Drake Passage after embarking at Puerto Williams, Chile. Averaging 14 knots in gale-force winds and high swells, the 19-knot-capable ship was able to offer a landing at Robert Island off the Antarctic Peninsula on the afternoon of the second full day of the cruise. 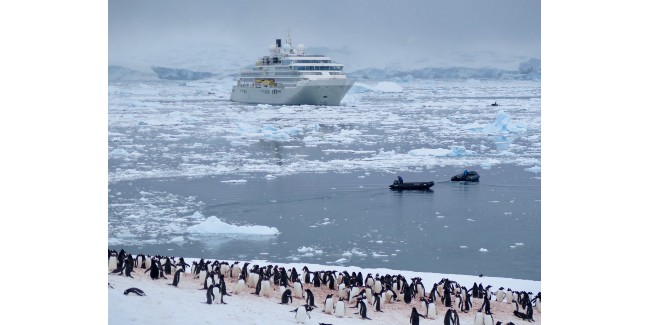 Silver Endeavour was named on a sparkling morning in the dramatic Lemaire Channel, where guests in Zodiacs and even Zodiac drivers with years of experience marveled at the ship's maneuverability as it silently slid through narrow passages between icebergs and steep cliffs, effortlessly sliced through meter-thick, first-year ice and gracefully spun around. 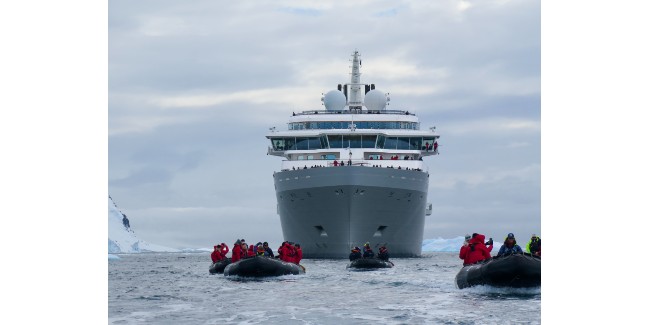 Zodiacs dance around Silver Endeavour in the Lemaire Channel

Peterstam called it 'by far the most interesting and technically advanced vessel I've ever been in charge of.' He credited the Azipods for the easy 360-degree turns.

Turn on a dime

'You can turn on a dime,' he said. 'If the ice is too thick, you can just turn around. The length of the ship (164 meters/538 feet) makes it very maneuverable ... When you maneuver in ice, it's fun. You can drive in and park there.'

Peterstam was also in command for the ship's maiden 2021/22 Antarctica season under Crystal Cruises, when it homeported at Ushuaia, Argentina. He said there were no tugboats and the wind can be 'horrible,' adding: 'We were only ship allowed to dock and undock. The coast guard said as long as the captain and the pilot say it's safe, you can do it. Other ships had to anchor.'

A further plus is dynamic positioning, alleviating the need for dropping anchor in sensitive areas.

Silver Endeavour will be polar-dedicated, with no plans for warm-weather deployment.

Conrad Combrink, Silversea's SVP expeditions, destinations & itinerary management, who was on his 79th visit to Antarctica during the shakedown cruise, said the vessel opens the possibility to visit remote areas at different times of the year.

For example: Canada's Hudson Bay in July. Usually a cruise would have to wait until August, when the ice isn't as thick. Going in July gives new opportunities to view migrating wildlife. Combrink's particularly excited about Canadian High Arctic expeditions and turning around at Pond Inlet, Nunavut.

And next year, he said, Silversea will be able to go further north on Greenland's east coast than ever before, exploring 'magnificent' Scoresby Sound and Northeast Greenland National Park, the world's largest national park, with chances to see the northern lights.

Built for long-range cruising, the ship has plenty of capacity for stores. In the Antarctica season, it will provision at Punta Arenas, mainly by airplane, and refuel with MGO at Puerto Williams.

Silver Endeavour sports vast open-deck viewing areas, including the bow and the top deck, with enclosed viewing from a spacious, forward-facing Observation Lounge and the impressive, aft-facing, double-deck, glass-enclosed Grill, an alternative dining venue with a swimming pool in the middle. 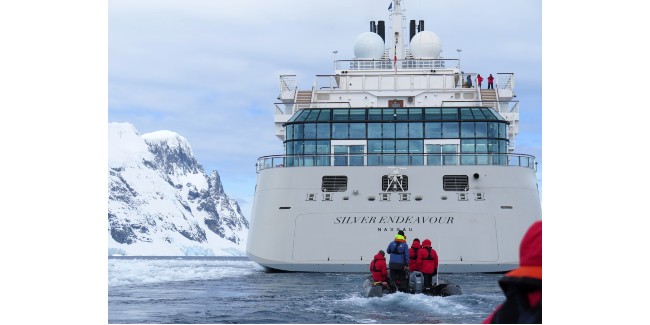 The aft-facing, double-deck, glass-enclosed Grill is an alternative dining venue with a swimming pool in the middle

Expedition recaps, briefings, lectures and films take place in the Explorer Lounge where two large screens flank the stage. Nicholas Crane, geographer, author, broadcaster and past president of the Royal Geographical Society, was among the lecturers, along with polar explorer Felicity Aston, who recounted her gripping saga of being the first woman to ski solo across Antarctica. She is Silver Endeavour's godmother.

Her ship is named for the great explorer Capt. James Cook's Endeavour, 'a vessel of science and curiosity,' Crane said, adding: 'Two hundred fifty years later, here we are on Silver Endeavour.' 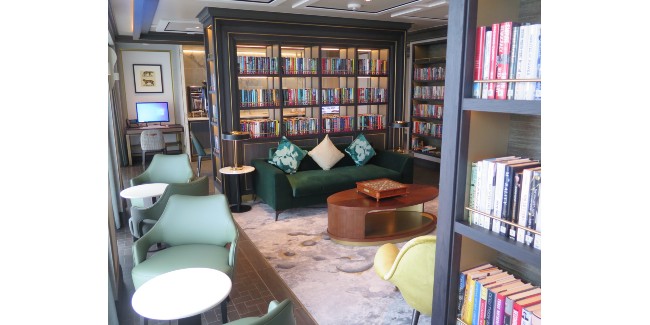 On the same high deck as the Observation Lounge is a comfy, well-stocked library with a coffee/drinks station and two terminals with Wi-Fi. Across the corridor the expedition staff hang out, sharing resources including charts and a microscope whose images can be viewed on a pair of big screens.

'We have a lot of tools,' said Carolina Carrasco Rozas, one of several Chileans on the international, 20-strong expedition team, whose members include a biologist, ornithologist, climatologist, anthropologist, historians and photographer. 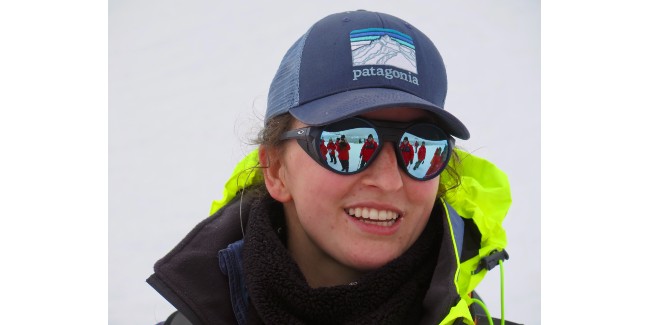 Polar historian and anthropologist Alexandra Hansen, one of the 20-strong expedition team

The ship carries 18 Zodiacs, a number that will increase to 22 next year to ensure everyone can explore at the same time. There are also a dozen kayaks. Two mudrooms provide small lockers and heated boot racks.

A broadcast studio is being commissioned to air lectures, images from a remotely operated vehicle that can go 600 meters from the ship and 300 meters down and views from a gimbal camera on the mast that can capture images 5 kilometers away in 4K resolution.

Though the ship was designed with helicopters and submarines, Silversea shuns those.

'For us, does not make sense to have a helicopter flying around Antarctica,' Combrink said. In other venues 'where they don't scare or disrupt the wildlife,' helicopters may be arranged via local suppliers. 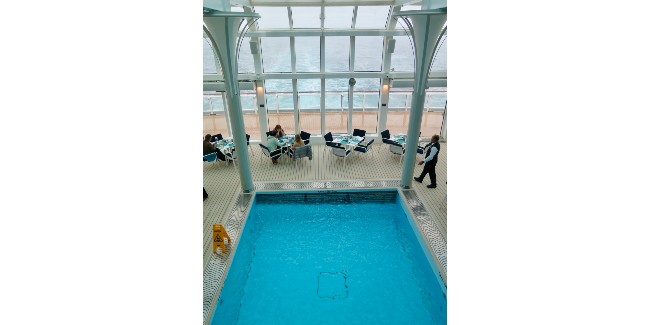 On the shakedown cruise Phil Hoffmann, managing director, Phil Hoffmann Travel, Australia, called Endeavour a 'great purchase ... it fits their image. It's a beautiful ship for the type of clients who want to do Antarctica. It handled the Drake Passage well.

'It's a very comfortable ship, very relaxed and provides plenty of opportunities to mingle with fellow travelers,' Hoffmann said. 'Part of what expedition cruising is about is meeting new people.

'You felt at home very quickly. It was easy to navigate the ship. The staff were ultra-friendly.'

Hoffmann found the expedition team 'very professional' and said the voyage was 'programmed well. Everyone got to do at least two expeditions a day.'

He also praised the lecturers and enjoyed the nightly expedition recap and next day's preview as a way to relax over drinks before dinner.

'The food was excellent,' he said.

Besides new livery, Silversea made few changes to its new ship before the Antarctica introduction, partly due to supply chain challenges.

After the season finishes March 4, some interior renovations are planned.

Carrying subcontractors, Silver Endeavour will deadhead back to Europe for a month-long wet dock at a yard to be decided, according to Silversea's Roberto Bruzzone, SVP marine operations.

Ten suites will be added to the 100 currently, so capacity will go from 200 to 220 passengers.

Six high-category suites will go into what is now the upper level of the helicopter hangar and the helicopter lounge on Deck 8, where the superstructure will be extended three or four meters aft.

And four new Veranda Suites will go on Deck 5 replacing what is now the medical center, which is relocating to Deck 4 where it will supplant the large, unused casino with its separate private gaming area. Additional crew cabins and offices will go there, too.

In the suites, Silversea will replace the walk-in closet doors, upgrade the metal bed frames (mattresses were already upgraded) and improve the closure system for shower doors.

Aft on the ship, a two-deck space that formerly housed the submarines is currently used as a workshop for the Zodiacs. Bruzzone said Silversea will be evaluating that area.

'You can feel the momentum' at Silversea under Royal Caribbean's ownership, travel seller Hoffmann said.

'You feel the energy being poured into this product — Antarctica and other areas like the Galápagos as well. They're going to do really well.'

He likes Silversea's door-to-door pricing option. 'People want to make these trips but as they get older ... this takes the worry out of it,' he said. And the Antarctica Bridge fly-cruise option 'distinguishes' the offering. 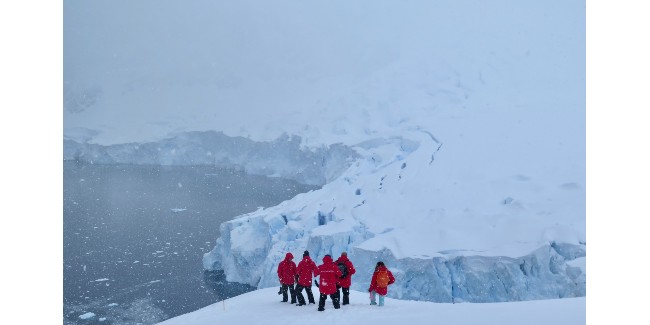 'The more people I send, the more come back as ambassadors for Antarctica. People appreciate the environmental and climate issues. It actually works in favor. Those who go come back inspired and this will be better for the world all around. This will spill into all destinations.'

'These will add a lot of choice for clients,' Hoffmann said. 'I think Silversea has got the recipe.'