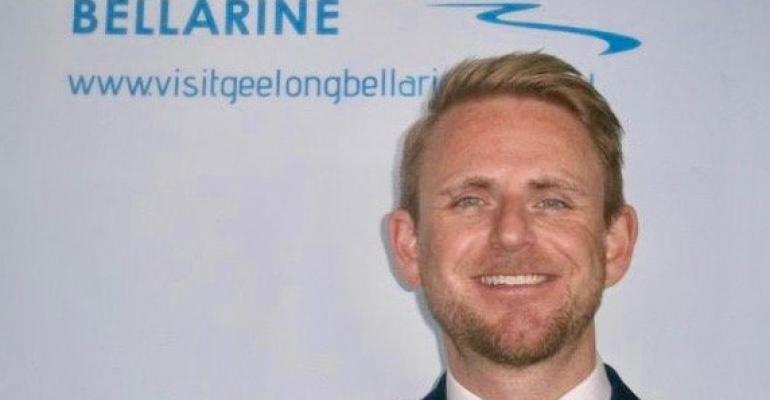 ‘If you get Sydney right, the whole region benefits and that’s the reality,’ Adam Armstrong told ACA 2019 in Geelong PHOTO: Helen Hutcheon
Sydney is the key to the success of cruising in the region and it is ‘frustrating’ that talks are still going on about a second terminal on the eastern side of the Harbour Bridge, Adam Armstrong, Silversea’s SVP and MD Australia and New Zealand, said in his keynote address at ACA 2019.

‘If you get Sydney right, the whole region benefits and that’s the reality,’ Armstrong said. ‘Sydney is where guests want to embark and everywhere else is, frankly, secondary.’

Originally from northern England, he said in the 15 years he has been in Sydney, countless ports around the world — like Shanghai, Beijing, Hong Kong, Vancouver and now even Brisbane — have built new terminals.

Why hasn’t Sydney?, he wanted to know.

Armstrong said there is a lot of excellent work being done at ports around Australia, but Sydney is the holy grail.

He said it is a ‘bucket list’ destination for inbound tourists and there are phenomenal inbound air connections.

‘The ideal is to mix up marquee and regional ports, for example Sydney/Eden and Fremantle/Busselton and, at the extreme, build new destinations like private islands,’ he said.

However, it is important that there are lots of interesting shore excursions in these regional destinations.

Armstrong said Australia is one of — if not the — most expensive places to operate cruise ships in the world.

He said the cost of fuel, port charges, government levies/fees/taxes and food and beverages drive cruise prices up and drive ships out.

‘I want to be very clear,’ he told ACA 2019. ‘The cruise industry will pay its way, especially when new infrastructure has to be funded, but as a country, we must not price ourselves out of an industry where assets are movable.’

Armstrong said there is much talk about expedition cruising being the ‘next big thing,’ with one-third of new ships in the expedition space. He said these are small ships going to far-flung destinations like Antarctica, Galápagos and the Arctic.

‘My point is that expedition is the next big “little” thing because the sector only makes up 3% of capacity coming on line,’ he said.

‘If we have capable, marquee ports in which to base ships, particularly in Sydney, plenty of new ports for itineraries, shore excursions for all appetites of guests and a reasonably priced operating environment, the industry will thrive, bringing hundreds of thousands of incremental guests and billions of tourist dollars,’ he said.