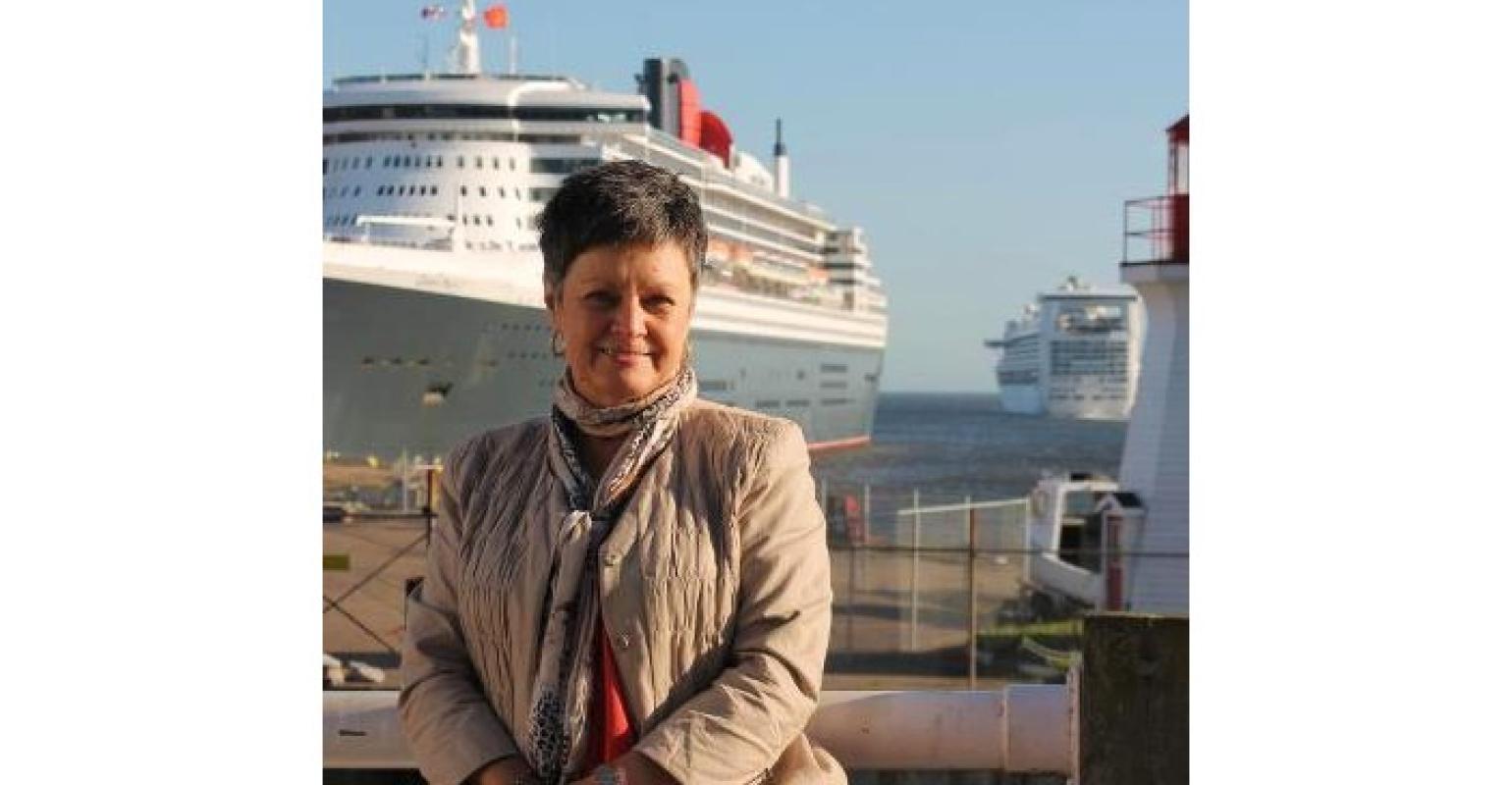 Betty MacMillan, a champion for cruising in Canada/New England and her own Port Saint John, New Brunswick, is retiring July 10.

'She is a pioneer in the cruise industry and we owe her a debt of gratitude for working so diligently for so many years to create a business that is incredibly important to our community and region. Betty will be missed but her legacy will endure,' said Andrew Dixon, SVP trade and business development, Port Saint John.

In 1989, the port tasked MacMillan with finding out about the cruise sector. 'I totally fell in love with the business,' she said.

She had a gift for it. Dixon called her a 'natural master of developing business relationships that are very personal to her and longstanding for sure.'

Stein Kruse, group CEO of Holland America Group and Carnival UK, said every time he met MacMillan 'she was sure to remind me about how enjoyable Saint John was for cruise guests.' He continued: 'There’s no doubt the port is so successful due to her continued commitment to developing it as a cruise destination and providing a welcoming environment to cruise guests. Betty’s passion helped to develop a wonderfully diverse and memorable experience over the years that shows off the best of the Bay of Fundy for visitors.' Kruse congratulated MacMillan on a 'standout career.'

In 2018, she was acknowledged internationally by being named 'Port Personality of the Year' at the Seatrade Cruise Awards in Lisbon.

'One of the best parts of working in the cruise industry and at Royal Caribbean is to be able to meet and partner with representatives of destinations from around the world to promote and deliver an amazing experience for our guests,' said Chris Allen, VP global deployment and itinerary planning, Royal Caribbean International and Celebrity Cruises. 'Betty stands in the pantheon of destination leaders tirelessly representing the Port of Saint John with charm and class. She is a great champion of the industry and friend and will be missed.'

Getting cruise ships to Saint John wasn't a shoo-in. The two key challenges: It's not an incidental port — ships have to go out of their way to get there, adding fuel costs — and the Bay of Fundy's tides are the world's highest.

But MacMillan brushed off the challenges, first targeting lines that didn't call Canada/New England by touting the region and then honing Saint John's cruise ship welcome into something memorable.

A band played on arrival, and a piper on departure. For many years, every woman who stepped from a cruise ship received a rose. Now the meet and greet staff hand out commemorative pins, which change each year for collectors.

And the phenomenon of the world's highest tides is also an attraction. Visitors can even walk on the ocean floor at low tide at Hopewell Rocks, a unique shore excursion.

'We're the active port of call. There are so many active things to do,' MacMillan said.

This year would reached 3m

In Saint John's peak 2010 season, more than 200,000 passengers visited. If not for 2020's extraordinary circumstances, the port would have broken that record and welcomed its 3 millionth cruiser.

'It would have been pretty hard to imagine 30 years ago that 3 million people would come to Saint John on cruise ships, and all go home with wonderful words about Saint John,' MacMillan said. 'It's wonderful what this has done for the city.'

She insisted she's 'been given way too much credit. It never comes down to one person. [Tour operator] Aquila from day one has been there as a fantastic partner. They're always innovating. They're so professional.' The city invested in paving and widening streets. And Port Saint John has been 'forward-thinking' and 'hasn't been afraid to invest.' It built two dedicated cruise terminals, equipping them with hydraulic boarding bridges and Yokohama fenders.

'The captains love them,' MacMillan said.

There have been peaks and valleys in cruise numbers. The North American Emissions Control Area cost quite a bit of business.

MacMillan persevered. She came up with all kinds of creative ways to keep Saint John top of mind. One year the port sent postcards to cruise executives, one with a poem about the difference in spelling between Saint John and St. John's (Newfoundland). That elicited a letter from Carnival Cruise Line President Bob Dickinson.

For a while, Carnival was bringing 70,000 passengers a year. Terry Thornton, formerly SVP nautical and port operations, called MacMillan a driving force who excelled at listening to the ideas and needs for the cruise lines. 'Working with her team and the local stakeholders, continuous improvements in the guest experience were made,' Thornton said. 'Her passion and enthusiastic approach to the business was such a great asset for us. She will be missed but I know that her accomplishments will serve the port well in the future.'

In 1989, when Saint John decided to explore the cruise sector, MacMillan attended her first Seatrade conference in Miami and that autumn, Cunard needed a safe harbor from Hurricane Gabriel for Cunard Princess. 'We rolled out the red carpet. We wanted to make an impression. That gave me something to sell to the cruise lines. I said "We did this with two days' notice. Imagine what we could do with a year's notice."'

Ships did come the following year, and kept coming. In the early 1990s, when a top luxury vessel, Royal Viking Sun, arrived, MacMillan considered it a 'major coup,' affirmation that 'We made it.' She laughs now about the local headline: 'City wowed by floating hotel.'

One of her favorite memories was QE2's maiden call on Aug. 5, 1992, when people from all over New Brunswick flocked to see the famous Cunarder. 'What was so great about getting QE2 is that people at the port authority told me that would never happen. I was also told we would never have two ships at the same time.'

By motor coach it's a long trek — two hours — but Aquila Tours found a way to sell it and their great guides keep people engaged on the way. MacMillan credits Princess Cruises' Crystal Morgan for insisting Saint John offer Hopewell Rocks as a shore excursion.

One of MacMillan's proudest accomplishments is being a founding member of the Atlantic Canada Cruise Association, along with Lynn Ledwidge of Halifax. The association was formally launched in 1997, with support from the Atlantic Canada Opportunities Agency. Each province received $5,000 to do something cruise-related, and MacMillan invited Princess Cruises' Tom Anderson to speak in New Brunswick. He agreed, provided she could get tour operators to come. She did, and things snowballed.

Bruce Nierenberg, then founder/president of Premier Cruise Lines, gave the keynote address, and other cruise executives included Gordon Buck of Carnival and Rick Strunck and Mark Ittel of Royal Caribbean. It was a great success, with more than 100 attendees.

At that 1999 event, a representative of Québec invited everyone there the following year. And so the Canada/New England Cruise Symposium became an annual event, rotating to a different city ever since. Saint John has hosted twice.

Natalie Allaby to take over

Natalie Allaby, MacMillan's understudy for four years, will assume the manager of cruise development role. 'She is absolutely up to the challenge. She'll be wonderful,' MacMillan said. Allaby has accompanied her to Seatrade and Florida-Caribbean Cruise Association events.

'She's very well-accepted by the lines. She's got the personality and the determination but is fun and you need that,' MacMillan said.

MacMillan's 'connections and relationships with the cruise lines and our local tourism community run very deep,' according to Allaby. 'I feel so fortunate to have learned the ropes from one of the best. Betty has equipped me with the knowledge and confidence to continue paving the way for cruise success in Saint John. I’ll never fill her shoes but am humbled by the opportunity and challenge to try.'

'It's been an incredible experience working in this industry,' MacMillan said. 'A special thanks to all.'