John Waggoner: 'I never expected to go beyond one boat' 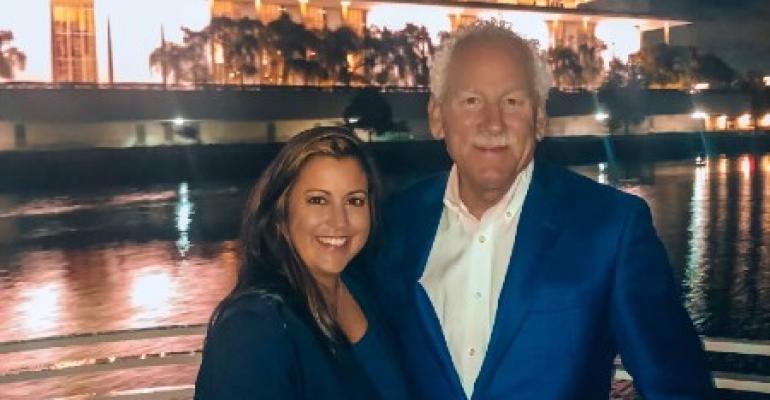 Kari Tarnowski and John Waggoner on the road show stop in Washington, DC, here, aboard a Hornblower Group boat passing the Kennedy Center
Midway through a US road show to introduce the newly rebranded American Queen Voyages and its breadth of offerings, founder John Waggoner reflected on the company's 10th anniversary.

He acquired American Queen — the largest paddlewheel steamboat ever built — in 2011 from the US Maritime Administration after the previous owner's bankruptcy. It took more than a year to get financing. He named the company American Queen Steamboat Co. because 'I never expected to go beyond one boat.

'My goal was one boat, but it was going to be world class.'

Waggoner's group had American Queen only two weeks before MARAD asked him to take a look at American Empress, another paddlewheeler it had repossessed. Reintroduced under American Queen Steamboat Co., that became 'wildly successful ... It's always sold out.'

There were opportunities to acquire former casino boats and rebuild/transform them (American Duchess and the christened-this-year American Countess), and a pair of former coastal vessels for the Great Lakes (Cape May Light and Cape Cod Light, recently called Victory I and Victory II, just renamed Ocean Voyager and Ocean Navigator).

After buying Victory Cruise Lines from Niels-Erik Lund came the opportunity to charter Infinity-class expedition vessels that Lund's SunStone Ships is building in China. Ocean Victory, delivered this week, will sail in Alaska in summer 2022 and sister Ocean Discoverer is to join it there in summer 2023.

As a marine biologist and fisherman, Waggoner has always been keen on Alaska. When he was honored by California Polytechnic State University as alumnus of the year, he told the dean 'Wouldn't it be great if we could put CalPoly students on the Zodiacs so when our guests see humpback whales, killer whales, pinnipeds and cormorants they could explain to them, and then give a presentation at night?' So that's going to happen, along with CalPoly professors coming aboard to do research and present their work.

Waggoner and his wife Claudette also launched a scholarship foundation so passengers can donate to help fund a CalPoly student's education.

When it came to developing the itineraries, 'Who knows more about Alaska than David Giersdorf? Nobody,' Waggoner said, referring to the cruise executive whose family pioneered expedition cruising in Alaska decades ago. Giersdorf laced the program with little-known spots his dad took him to as a kid. And the seasoned expedition Capt. Mike Bennett is putting together the expedition team, working with the Alaska Whale Foundation and several Native communities.

'Alaska is going to be just awesome,' Waggoner said, adding that the 183-passenger Ulstein X-BOW ships will enable up-close and personal cruising; they have drop-down viewing platforms on the bow, zero-speed stabilizers and dynamic positioning.

Branching out to Mexico, Southeast US, Bahamas

And with this growth and new destinations — besides Alaska, Mexico's Yucatán Peninsula and the US Southeast/Bahamas join the roster early 2022 — the timing was right for a rebranding.

SVP Marketing Kari Tarnowski and her team came up with the strategy to combine American Queen Steamboat Co. and Victory Cruise Lines into American Queen Voyages and the new tagline, 'Discovery Runs Deep' — both unveiled at Seatrade Cruise Global.

It was important to honor the American Queen name, which everyone knows. And with the fleet now spanning river, lakes, ocean and expedition cruising, 'Voyages' tied everything together.

Waggoner pointed to experiences like learning how to make Southern biscuits from Chef Regina Charboneau in Natchez, Mississippi, entering Louisiana's Angola Prison to hear the story of someone who's incarcerated for life, riding through a blighted part of Helena, Arkansas, to a church to hear a gospel choir or visiting Morgan Freeman's juke joint in Clarksdale, Mississippi, for Delta blues.

Waggoner said now is the perfect time to get the word out — a 'unique opportunity as the world is still opening. A lot of people are not ready to go to Europe but they still want a vacation. We have destinations around the country for the drive market or a short domestic flight away. Our [COVID] protocols are good (his was the first cruise line to require 100% vaccination plus travelers currently get a PCR test before embarking). People feel safe because they can get off the boat every day. Our boats have smaller capacity.

The restart has been like moving up a dimmer switch. American Queen missed the first part of the season, the Great Lakes boats couldn't operate because Canada was closed and the Alaska expedition debut didn't happen. As a result, the company will be at about 40% of capacity in 2021.

Festivities with special guests are planned in Natchez for the 10th anniversary of American Queen's christening on April 28, 2022.

Besides the road show and Ocean Victory's delivery this week, the company's new Fort Lauderdale headquarters opened on Monday.

'During COVID, because a lot of the cruise lines laid off really, really good people, we were able to hire some great ones,' Waggoner said. It made sense to tap the talent pool in South Florida and American Queen plans to have up to a hundred people there in sales, marketing, the call center, public relations and some operations. The New Albany, Indiana office will retain accounting, finance and legal staff.

During the pandemic shutdown, the dynamic Waggoner found time to expand his classic car collection to 17 and recorded a CD, 'The Chairman of the Board Sings,' available on Apple Music and Spotify.

This started as a surprise Christmas gift for his wife but — like his cruise ambitions — it mushroomed.