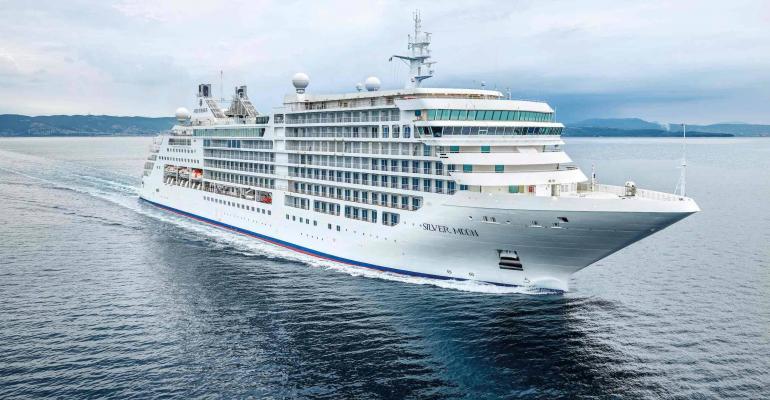 Scheduled for delivery on Oct. 30, Silver Moon is the sister of 2017's Silver Muse. Many of the same craftspeople who contributed to the earlier ship have been involved with Silver Moon.

During the peak months of construction at Fincantieri’s Ancona yard, more than 1,000 professionals worked on the ship simultaneously, with over 390 companies contributing.

Design firm Hirsch-Bedner Associates was responsible for the venues that feature Silversea's new culinary program, S.A.L.T., which debuts with Silver Muse. These include S.A.L.T. Lab, S.A.L.T. Kitchen and S.A.L.T. Bar. The venues took 18 months from initial brief to completion, with approximately 2,740 man-hours invested by craftspeople in London, Miami and various locations in Italy.

'Creating a synergy between the ship’s three S.A.L.T. venues, which evolves from day to night, and having such a strong sociable element to the immersive culinary experiences is completely unique,' HBA associate Matteo Pace said. 'The brief was about finding a balance between land and sea, bringing the two together through the world’s culinary influences.

'Each space needed a bespoke design with a clear connection, driven by the overall flow,' he continued. 'Tactile and surprising in their design, the spaces needed to bring to life places and personalities, and be experiences within themselves. The S.A.L.T. program will transport travelers on a journey of discovery from port to port, which is reflected in the design of the venues, with lots of unique objects that draw on influences from all over the world.'

When it came to the color palette, lighter tones were employed in the communal areas and cooking spaces in S.A.L.T. Lab; rich details and accents in the main restaurant, S.A.L.T. Kitchen; and a darker, more mysterious feel for S.A.L.T. Bar.

GEM for public areas and suites

The enlarged La Dame Restaurant will now accommodate 56 diners and is decorated with handcrafted Lalique crystal panels. Capacity of the popular Atlantide Restaurant has been increased to seat 220. The Connoisseur’s Corner (cigar bar) now includes a sophisticated outdoor area. And the Dolce Vita Lounge, at the heart of the ship, has a new layout, with an atmosphere that changes throughout the day.

Eleven handmade crystal artworks by Lalique adorn the walls of La Dame Restaurant. A team of around 15, including a designer from the Lalique Interior Design Studio, an engineer and a team of artisans, completed the project over an 18-month period. Lalique’s craftspeople spent approximately 30 hours producing each bespoke panel, applying their ancestral know-how in the company’s historic French factory, which dates to 1922.

Before being installed, each crystal panel underwent a two-stage process. During the hot glass process, Lalique’s glassmakers braved extreme workshop temperatures to shape the crystal. Next, in a cold glass process, the artisans sculpted and finished each creation, forming Lalique's characteristic contrast between clear and matte crystal.

Each mattress offers dual tension so travelers can choose between firm support on one side and soft on the other. Each element of the beds — the box springs, the mattresses and the toppers — was signed and dated by the craftsperson who created it.