It's a go: SeaDream I to begin season of Barbados round-trips Nov. 7 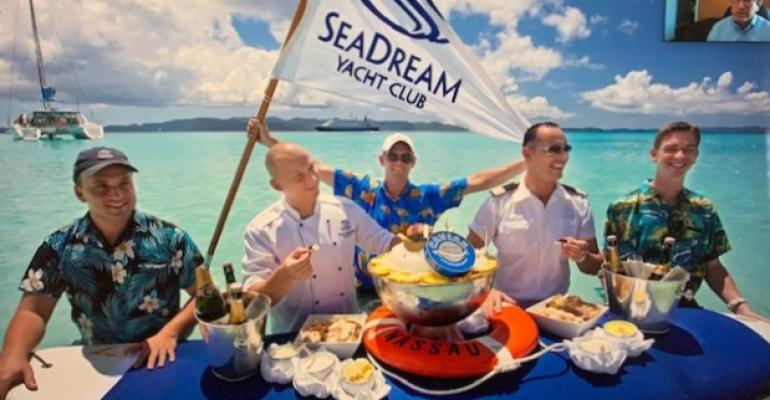 Just as SeaDream Yacht Club became the first to restart international cruises in Europe, the line is now poised to possibly do the same in the Caribbean.

SeaDream I is going to redeploy to the region for a winter season of Barbados round-trips, a new itinerary for SeaDream.

The yacht, which together with SeaDream II has been sailing Norway-Denmark cruises since June, will depart Oslo Oct. 15 on a 21-night trans-Atlantic voyage. It will call at Skagen (Denmark), Southampton, Funchal (Madeira), Kingstown (St. Vincent) and Mayreau (Grenadines) before arriving at Bridgetown Nov. 5.

Cruises to St. Vincent and the Grenadines and Grenada

From there, starting Nov. 7, SeaDream I will undertake 22 Barbados round-trips, mostly seven days. From Bridgetown the yacht will call at ports in St. Vincent and the Genadines and Grenada, with SeaDream's signature caviar in the surf and beach barbecue to take place at Mayreau.

After the last departure, on April 3, SeaDream I will head to the Mediterranean to resume published itineraries with SeaDream II.

During a webinar update Tuesday, Emilio Freeman, VP itineraries and destinations, said the Caribbean destinations are all off the beaten path and offer white sand beaches, waterfalls, great snorkeling and reefs. It's looking like governments will require travelers to stick to company-organized shore visits to designated places, however, that may change, he added.

Testing before flying and embarking

Travelers must have a COVID-19 PCR test between 48 and 72 hours before arriving in Barbados, as the country requires. It's possible officials would mandate another test on arrival, depending on the visitor's origin. At embarkation the ship's doctor, overseen by local health officials, will administer a test using Abbot ID Now technology, which yields quick results. This means people will embark in designated time slots from noon to 6 p.m., or beyond if necessary.

A health questionnaire and facial recognition thermal screening will follow, with passengers and crew getting the temperature check daily throughout the voyage.

Luggage and shoes will be sanitized. On board, the entire ship will be cleaned with a medical-quality Altapure AP-4 ultrasonic fogger, equipment that is used to sanitize operating theaters, and UV-C technology will be used in accommodations daily.

SeaDream is looking at an Apple-based program where travelers would input data two weeks before the trip and two weeks after, to enable contact tracing. An evacuation plan in the event of an outbreak is still being developed.

As of now, no mask requirement

Social distancing will be practiced on board but, as of now, masks won't be required.

'So far, we do not want people to be wearing masks. That's why you get tested before. We want you to enjoy the SeaDream experience,' said Sudesh Kishore, SVP hotel operations. When a customer on the webinar questioned that, EVP Andreas Brynestad said SeaDream would listen to guest feedback so the mask policy may be subject to change. The yacht will have masks available, he added.

SeaDream had been scheduled to sail in the US Virgin Islands and British Virgin Islands this winter, but company President Bob Lepisto indicated things are 'too complicated' in both places right now.

'Come November, I believe there's going to be a big change from [the US Centers for Disease Control and Prevention] for the US ports,' Brynestad opined. 'But, realistically, we're not going to know for a long time.'

What will SeaDream II do this winter?

Lepisto hopes there will be such demand for the new Barbados program that a second yacht is warranted there.