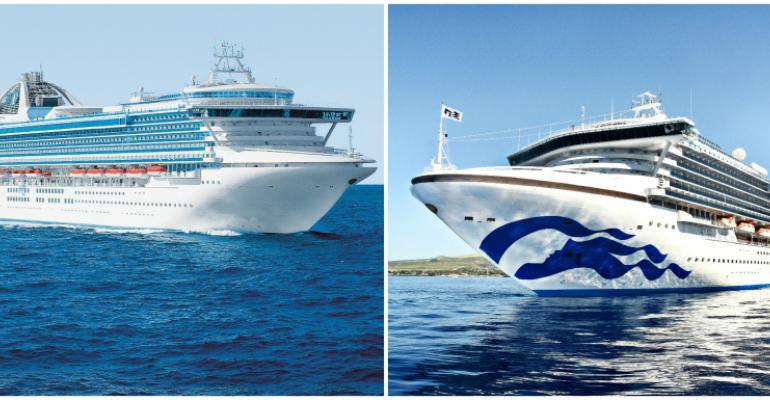 Princess Cruises confirmed the official transfer of Golden Princess and the accelerated transition of Star Princess to P&O Cruises Australia.

As announced in 2018, the two vessels will now debut as Pacific Adventure (Golden Princess) and Pacific Encounter (Star Princess), both anticipated to sail in 2021.

P&O Cruises Australia will then have three mega-ships, together with Pacific Explorer (ex Dawn Princess).

'Golden Princess and Star Princess have sailed all over the world, creating lifelong memories for the millions of guests who sailed upon these beloved cruise ships,' Princess President Jan Swartz said. 'We know their wonderful legacy will continue under sister brand P&O Cruises Australia, which has become so well-known for delivering unforgettable cruise holidays for Aussies and Kiwis to some of the most idyllic destinations in the South Pacific.'

Golden Princess first joined the fleet in May 2001 with sister ship Star Princess setting sail the following year in January 2002.

The ships offered an unstructured approach called Personal Choice Cruising, which included Personal Choice Dining. Travelers could choose between flexible Anytime Dining in one of the main dining rooms and Traditional Dining with an assigned time, tablemates and wait staff. Both ships were also among the first to offer the Lotus Spa and Fitness Centers.

In addition, each ship offered more than 710 balcony staterooms.

Throughout the years, both Golden Princess and Star Princess were modernized with signature brand features, including Movies Under the Stars, The Sanctuary adults-only retreat, the Piazza and specialty restaurants Sabatini’s and Crown Grill.

Pacific Adventure, which was to have made her debut in Sydney in November, will now make her first cruise from Sydney on April 30 — a three-night short break.

Pacific Encounter will homeport at the new A$177m Brisbane International Cruise Terminal, which was due to open this month. She is scheduled to depart May 7 on a three-night short break.

Pacific Explorer’s pause has been extended until the end of the year, including her Christmas and New Year cruises from Brisbane ‘to give certainty for guests over this important holiday period.’ Her first cruise is now scheduled for January 9, before she homeports in Auckland from February 6 until late April.

‘While the current pause in cruise operations is until December 17 in Australia, the pathway to restart remains unclear,’ P&O Cruises Australia President Sture Myrmell said.