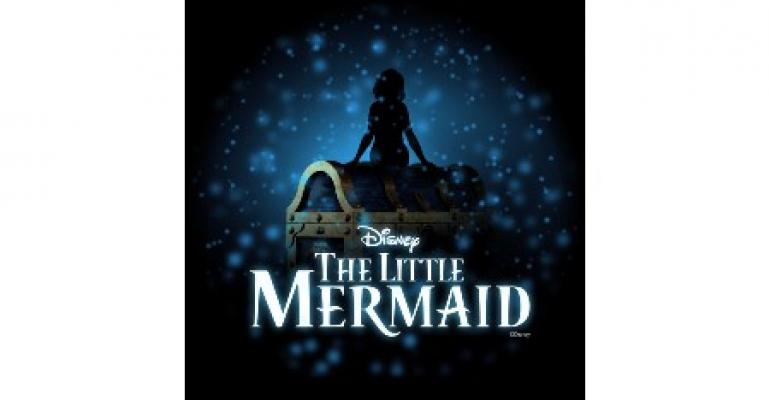 On deck, passengers will get to rock out to an all-new pirate deck party complete with fireworks at sea.

Disney Wish's 1,274-seat Walt Disney Theatre will evoke an enchanted forest inspired by scenes from Walt Disney Animation Studios’ 'Fantasia,' with orchestra and balcony seating spanning three decks. The theater will be equipped with the most robust projection mapping capabilities of any Disney ship and a Dolby Atmos 3D audio system — touted as a first for the cruise industry — to create a transformative theatrical experience.

Developed exclusively for Disney Wish, 'Disney The Little Mermaid' will be an original Broadway-style stage adaptation of the 1989 Disney Animation film.

In this modern-day retelling, the curtain will rise on an enchanted treasure chest at the moment it is discovered by a group of storytellers, led by a special young woman who has the power to unlock its magic. As they uncover the whozits and whatzits galore hidden within the trunk, the storytellers will take on the roles of Ariel, Ursula, Prince Eric, Sebastian, Flounder and others, bringing to life the immersive undersea world. They’ll put their own contemporary spin on the timeless story of a young woman’s search for independence, love and a place in the world.

New orchestrations of songs like 'Part of Your World,' 'Poor Unfortunate Souls' and 'Under the Sea' are planned, while video projections will transform the Walt Disney Theatre into a 360-degree undersea environment.

Cutting-edge puppetry will animate fantastical sea creatures and characters such as Sebastian, Flounder, Scuttle, and Flotsam and Jetsam.

On their first night aboard Disney Wish, passengers will be welcomed with an original musical, 'Disney Seas the Adventure.' When Captain Minnie hands over the helm to her friend Goofy, he’ll sail into uncharted waters on a journey to discover his own inner captain.

Along the way, Goofy will encounter Disney and Pixar friends who encourage him to lead with his heart through renditions of iconic Disney songs.

The adventure culminates in a cavalcade of characters joining Captain Minnie and Goofy on stage for a grand farewell before leading passengers out of the theater and into the Grand Hall for a special send-off experience.

As previously announced, Disney Wish will also feature a reimagined adaptation of 'Disney’s Aladdin – A Musical Spectacular,' a favorite show from across the fleet.

Iconic scenes and songs from the movie will be re-created on stage with brand-new sets and theater-filling projection design developed exclusively for Disney Wish.

Pirate Night with a rock-n-roll twist

Pirate’s Rockin’ Parlay Party is a new take on the fleet’s signature nighttime deck celebration. Once per cruise, travelers of all ages can don pirate garb and head to the upper decks for a rock-n-roll party complete with fireworks.

Hosted by Captain Redd — a descendent of the famous red-headed rogue from the Pirates of the Caribbean theme park attractions — the show will feature live music, stunts, special effects and surprises. Throughout the party, she and her band of head-banging buccaneers will perform famous radio hits.

Disney Wish is scheduled to sail its maiden voyage from Port Canaveral on June 9, 2022.