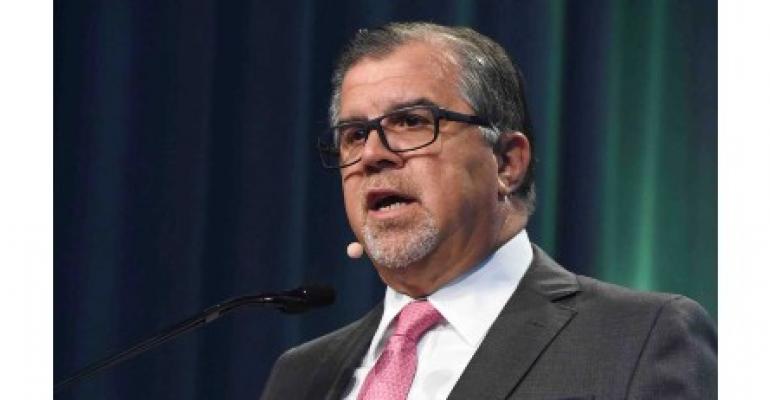 'As long as there are no additional black swan events, we are seeing fantastic pricing strength,' Frank Del Rio said

As things stand today, 'and without another black swan event derailing our plans, there is a reasonable and clear path to reach record net yields and record adjusted EBITDA levels in 2023, boosted by the introduction of four new ships across our three brands over the next 18 months,' Del Rio told analysts during the company's first quarter earnings call.

2023 will be the first year that each NCLH brand welcomes new capacity: Norwegian Cruise Line's Norwegian Viva, Oceania Cruises' Vista and Regent Seven Seas Cruises' Seven Seas Grandeur. Del Rio said new ships are a meaningful driver of net yield growth and overall profitabilty, attracting new customers and reigniting loyal past guests to return for new and elevated experiences. Traditionally they have a 'halo effect' on the rest of the fleet.

Unlike competitors, no new ships arrived to NCLH during the pandemic. The four coming in the next 18 months represent a 20% capacity increase from 2019 to 2023. In total nine newbuilds are due by 2027 — a 50% capacity increase, which NCLH said is industry-leading.

Prima and Prima Plus ships

They include NCL's six-ship Prima class, with the first two vessels (Norwegian Prima and Norwegian Viva) each having 3,215 lower berths, and four larger Prima Plus ships, each with 3,550 lower berths, it was revealed today.

These start with Norwegian Prima in August. 'Booking volumes continue to be stellar and pricing is significantly outpacing our past new ship launches,' Del Rio said.

EVP/CFO Mark Kempa noted consumers are more and more willing to pay higher prices shoreside, which gives an opportunity for the 'under-priced' cruise industry. NCLH is also seeing more close-in demand, with bookings made during the cancellation period, 'a good sign.' That said, the trend in planning travel further out continues, with Oceania Cruises just chalking up a peak booking day when sales opened for its 2024 voyages.

Goldman Sachs analyst Stephen Grambling asked about the forecast of record net yields. He said skeptics are concerned about the bullish outlook 'always successively six months out each quarter for about a year, so what has changed this quarter to give greater in those trends finally materializing?'

'We keep having these black swan events. First it was Delta, then it was Omicron and then the Ukraine-Russia situation,' Del Rio said, 'so we have tempered all our remarks by saying as long as there are no additional black swan events, we are seeing fantastic pricing strength. It is meaningful over what our record 2019 pricing was ... Promise me no more black swan events, and I'll promise you record net yields.'

Kempa added: 'We did turn cash flow positive in March, we are confident we are going to be cash-flow positive in the second quarter. It's been more than two years as a company that we can say that. That's going to translate into EBITDA and, ultimately, profitability. The tide is turning. The future looks bright.'

Likely pullback of some Asia capacity

While most destinations are opening — the company just received word that New Zealand would be taking international cruise ships — Asia remains questionable. NCLH has little exposure in China, while Southeast Asia deploynent starts in Q4, so there's time.

Asia is booking 'strongly at really high prices,' Del Rio said. However, it's likely the company will take some capacity off the books to reduce risk and likely that would be at the NCL brand, he added.

NCLH Q1 loss wider than expected but bookings have rebounded
May 10, 2022