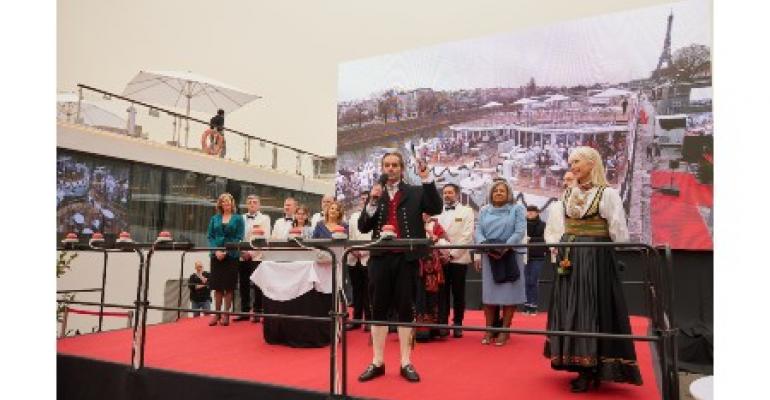 Viking EVP Karine Hagen, right, with the emcee and godmothers

Viking welcomed eight new river vessels to its fleet during a celebration in Paris with streaming from Amsterdam.

Of the eight new Viking Longships, four — Viking Fjorgyn, Viking Kari, Viking Radgrid and Viking Skaga — are built specifically to navigate the Seine River and carry travelers into the heart of Paris to an exclusive docking location at Port de Grenelle, a short walk from the Eiffel Tower. 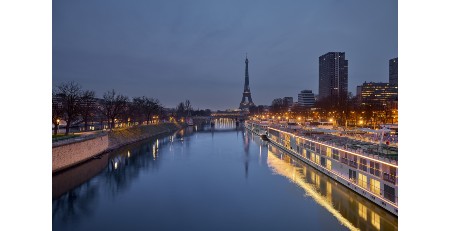 The mass naming comes as Viking continues its 25th anniversary and a year of milestones. In January Viking Expeditions launched its first polar-class vessel, Viking Octantis. By the end of the year, sister expedition Viking Polaris should be in service, along with Viking Mars and Viking Neptune, purpose-built vessels for the Nile and Mekong rivers and the new Viking Mississippi.

'As we mark 25 years of sailing the iconic waterways of the world, it is always a proud day when we welcome new ships to our fleet and offer more opportunities for curious travelers to explore the world in comfort,' Viking Chairman Torstein Hagen said.

Viking invited eight distinguished cultural partners and important members of the company’s extended family to serve as godmothers for the eight river vessels.

They include Alma Deutscher (Viking Gymir), 17, a musical phenomenon who at a young age was hailed as the 'new Mozart.' She's a violinist, pianist, composer and conductor, and at just 17 years old was hailed as the “new Mozart” at an early age. She will perform for select voyages during a 'Privileged Access' concert at Wiener Konzerthaus.

Helen Deutscher (Viking Egdir) is a violinist, pianist and vocalist, who honed her skills at the Music Gymnasium in Vienna and as a member of the Vienna State Opera’s children’s chorus. She has also performed in several productions of her sister Alma's opera, 'Cinderella.'

Janie Deutscher (Viking Radgrid) is an author, educator and accomplished musician who earned an organ scholarship to Oxford University where she later taught medieval literature. In recent years, she has concentrated on homeschooling and supporting her daughters Alma and Helen. 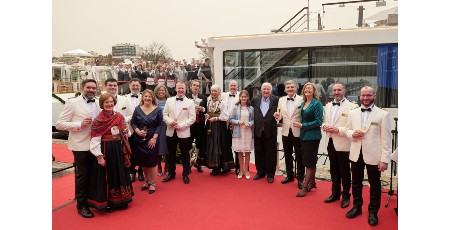 Torstein Hagen, fifth from right, with godmothers and captains

Brenda Hunsberger (Viking Hervor) has served as a travel agent for more than four decades and is SVP travel services with AAA Club Alliance.

Karryn Christopher (Viking Gersemi) is EVP preferred partnerships & marketing for Signature Travel Network, where she has led the transformation of the company’s sales and marketing division.

Ghislaine Wood (Viking Fjorgyn) is the deputy director of the University of East Anglia’s Sainsbury Centre, one of the most important public university art galleries in Great Britain. She curates exhibitions, including the upcoming 'Visions of Ancient Egypt,' developed in partnership with Viking.

Muriel Wilson (Viking Skaga) is director of event strategy & sponsorships for Virtuoso, and has been a staff member of the luxury consortium for more than 40 years.

The naming event was executed by connecting the vessels in Paris and Amsterdam via satellite. In Viking tradition, a bottle of Gammel Opland aquavit was broken on the bow of each vessel, a tribute to Hagen's mother Ragnhild, born in Opland.