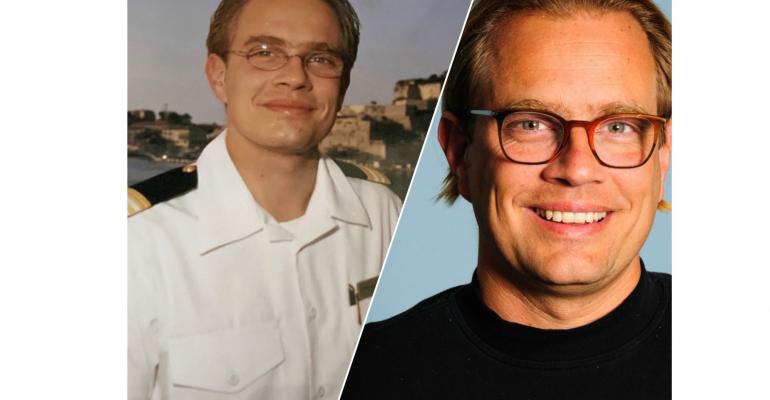 Chris Prelog as a waiter aboard Seabourn Legend in 2000, two years after his cruise industry start, and now as Windstar president

From cruise ship waiter to cruise line president, Chris Prelog has had an astonishing career.

Now at the helm of Windstar Cruises, he never imagined this trajectory — especially since he wasn't sure he'd make it through his first contract at sea in 1998. He'd traveled half-way around the world from his native Austria to Australia, arriving jet-lagged and 'without sea legs' to Seabourn Legend and sailed across the notoriously rough Tasman Sea to Hobart. ('Without sea legs' is putting it mildly — he needed a shot to manage.)

It was January. Prelog had gone from the dead of winter in Austria to Sydney's summer heat. Phoning home, he told his father he didn't think he could stick it out.

But then the ship arrived in Bora Bora and, there on the beach, Prelog decided, 'I can do this,' he recalled with a laugh.

Plus, he enjoyed the camaraderie. 'What ships do is bring people together. You build lasting relationships with the crew, guests and officers.'

Prelog worked his way up through the hotel department and then shoreside at Seabourn, spending 18 years there, ultimately as VP hotel operations and purchasing. He came to Windstar as VP fleet operations in November 2016 and was promoted to chief operating officer in February this year when President John Delaney left.

He's been overseeing the $250m Star Plus initiative to lengthen and upgrade three ships and the 'Beyond Ordinary Care' COVID-19 protocols, a major focus during this time out of service.

Having those years at sea helps Prelog appreciate what it takes for the crew to implement things on board. He also learns from them: 'It works both ways.'

Prelog is well-versed in operations. The 'newness part of the job' is coping with the whole pandemic. 'Everyone in the industry is going through this learning curve,' he said. 'I'm positive the cruise industry will come back very strongly because the industry has always adapted so many times in its history.'

In fact, 'We're seeing our guests returning and booking strongly for 2021. We're also seeing a lot of new to brand guests. We believe the small ships will be well-positioned to operate in the post-COVID-19 era.'

This is a natural outcome of social distancing and the taboo on big gatherings. 'Guests are looking for deeper, unique experiences with smaller amounts of people congregating,' he said.

The sales and marketing area may be new for Prelog, but he's supported by a strong team at Windstar and its parent company, Xanterra, based in Denver. He's worked closely with his boss, Andrew Todd, CEO of Windstar and of Xanterra Travel Collection, and the Denver team for a long time, and views it as a 'great partnership' that's supportive on all fronts.

It's a 'matrix organization' with overlapping functions, Prelog explained. Windstar handles the operations and the expansion projects (that group is led by VP John Gunner). The commercial team reports to Betsy O'Rourke, chief marketing officer for Xanterra, and HR and accounting report to Denver, as well.

Where the magic happens

'We are a people industry, a service industry ... the magic happens by the personal interaction, having discussions around the water cooler and in meetings,' Prelog said. But he doubts everyone will go back to a five days a week, in-office schedule.

As for the crew, 'absolutely they want to come back. They're committed to Windstar, and Windstar's committed to them.'

Sailings are suspended through 2020, so it will be some months yet.

Fincantieri's Palermo shipyard, where the Star Plus ship lengthenings and updates are taking place, is back 'in full production ... The yard is doing very well. We're very positive that all the enhancements we set out to do will be completed and including the various upgrades to the HVAC systems.' Windstar's 'Beyond Ordinary Care' program includes HEPA filtration and UV-C light to fight COVID-19.

Star Breeze is scheduled to be delivered in one month and will debut on new Caribbean cruises in the spring before transiting the Panama Canal to sail in the Sea of Cortez and then Alaska. Star Legend is in the drydock, with its new midsection inserted and is welded back together. It's to come out in March in the Mediterranean. And Star Pride is to enter the Palermo yard at year's end and should emerge in July for Northern Europe cruises.

The 'stretched' ships will have capacity for 312 passengers each, but some cabins will be set aside for isolation/quarantine. It's not decided how many people will be carried initially, but Windstar is looking at how to manage occupancies in the restaurants, spa and other facilities.

With Prelog's first ship, Legend, part of the Windstar fleet, everything has come full circle.

'All six ships are really special to me,' he said. 'I really enjoy operating those size of ships. It is a unique experience and such high camaraderie among guests and crew, and that's what makes this special. It makes you addicted to small ships.'