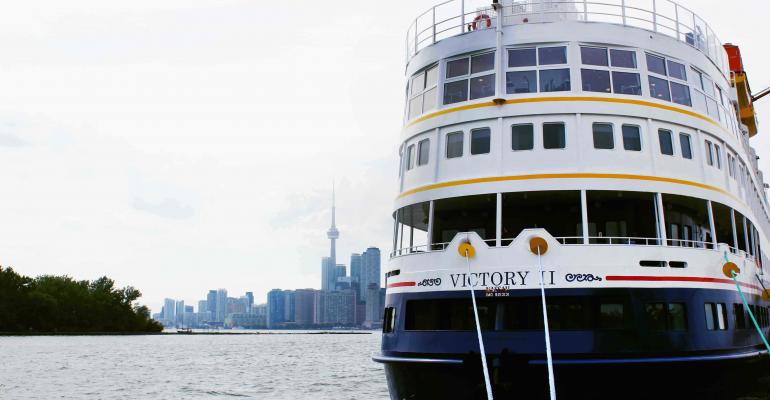 Oasis of the Seas crewman dies

Dexter Joyosa, an Oasis of the Seas bartender from the Philippines, died in a Broward (South Florida) hospital Saturday, according to The Miami Herald. The Herald said colleagues on the ship cried out as the captain announced the news.

Victory to operate just one ship in 2020

Victory Cruise Lines extended its temporary suspension of operations by Victory I through June and canceled all Victory II itineraries for the remainder of the 2020 season. Victory I is to resume service on July 5.

'We came to the difficult decision to consolidate the Victory II itineraries with Victory I due to the shortened nature of our 2020 season, as a result of the ongoing travel restrictions and port closures. It is our hope that in doing so, we can prioritize delivering the extraordinary Great Lakes sailing experience that our loyal guests have come to expect from the VCL brand,' said John Waggoner, founder and CEO of VCL's parent, American Queen Steamboat Co.

Now that passenger operations are paused, Princess Cruises said 'the entire company remains committed and focused in our efforts to return all our teammates safely home to their family and friends.' However, that is 'extremely challenging and complex' due to international air travel and government restrictions, along with port closures.

The line said that over recent weeks, it has repatriated thousands of crew aboard non-commercial aircraft, and it continues working to find ways to get others to their home countries including via Princess ships.

During their time on board, the remaining 'teammates,' as Princess is referring to crew, have been moved into their own guest balcony stateroom to allow for self-isolation and 'maximizing comfort, health and well-being. While maintaining social distancing they have the opportunity to spend time on the top decks,' the line added.

MSC Magnifica, which had been on a world voyage when global operations were paused, arrived early this morning at Marseille and was granted an exemption to dock, despite the current French ban on cruise calls. As earlier reported, Marseille had been the scheduled final port.

Disembarkation is expected to stretch over two days. No COVID-19 cases have been reported on board. Since it left Wellington, New Zealand, March 10, MSC Magnifica has made only technical calls, with passengers not allowed ashore.

This marks the final MSC Cruises ship that was at sea. The company has arranged onward travel for passengers via motor coach, rail and scheduled and chartered aircraft.

Silversea reduced its deposit requirement to $1,000 per suite for any new booking made before June 30. In conjunction, travelers will receive a $1,000 on-board spending credit per suite. The reduced deposit offer applies to all voyages apart from full world cruises and 'grand voyages.' Travelers with future cruise credits can take advantage of this offer.

The line also extended its ‘Cruise with Confidence’ cancellation program to all voyages scheduled to depart before the end of 2020. Passengers may cancel up to 48 hours prior to sailing and receive a 100% future cruise credit valid for two years. When they opt for the FCC and have paid in full, their travel agent's commission is protected for both the canceled booking and the future reservation using the FCC, bringing Silversea in line with sister brands Royal Caribbean International, Celebrity Cruises and Azamara.

As earlier reported, Silversea is involved in the RCL Cares program that assists travel professionals in the US and its territories by providing information about available government benefits, including those in the CARES Act.

Windstar Cruises extended its suspension of service through June. Those whose sailings were canceled can get a refund or a 125% future cruise credit for use by Dec. 31, 2021. Travelers have until the same date to request the refund.