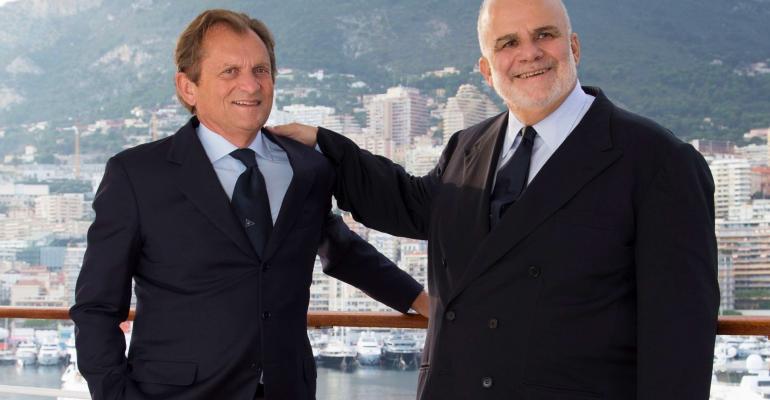 Manfredi Lefebvre d'Ovidio, right, hopes Silversea will keep the same family spirit as part of the Royal Caribbean Group. He's staying on, and so is CEO Roberto Martinoli, left

Silversea Chairman Manfredi Lefebvre d'Ovidio is feeling upbeat amid the worst crisis the cruise industry has ever faced.

Why? Bookings are strong. Europe, at least, is recovering, and the brand he nurtured for 25 years is in safe hands with the Royal Caribbean Group.

Silversea bookings are 'stronger than what we could ever have hoped. If you compare with last year, it's plus numbers everywhere,' Lefebvre told Seatrade Cruise News in a one-to-one interview following the sale of his remaining Silversea stake last week.

After 9/11, 'We could operate, but the passengers were not willing to travel,' Lefebvre said. 'Now it's the opposite. Passengers would love to travel, but we can't operate.'

Lefebvre is staying on as chairman and made it clear he'll keep involved. CEO Roberto Martinoli and the rest of the management team, the Monaco headquarters and Silversea's regional offices are expected to remain intact.

Where he sits in Monaco, the virus is under control and things are looking much rosier for well-off Europeans. In Capri over the weekend, Lefebvre had to remind himself there had been a crisis.

Restaurant waiters and hotel staff wore masks, and temperatures were checked at the hotel. But 'The willingness of people to engage, sit at a bar, it's amazing,' Lefebvre recounted. 'There were a lot of people. It was pleasant. You can see what is not affected by the financial crisis is pent-up demand for one of the major consumer goods of the future: experiences.'

Actor Hugh Grant is vacationing on the French Riviera, and Lefebvre lunched with Ralph Fiennes in Capri. 'It's not like it was,' Silversea Chief Marketing Officer Barbara Muckermann said. 'Luxury tourism has started.'

Silversea's marketing machine has been 'on a ventilator,' as she put it, with virtually no spending for months. Yet 'We are getting an incredible natural demand from the market. The customers want to travel. It's the governments that don't allow us. Bookings for 2021 and 2022 are incredibly strong, and with minimal marketing.'

If not for the pandemic, Lefebvre would have held his remaining one-third stake in Silversea for maybe another year. Selling was a 'logical move for estate planning,' he said, pointing out if RCL stock recovers to its 52-week high of $135 and change, his shares will be worth $700m.

When the deal closed July 9, the 5.2m RCL shares he was paid were valued at about $245m. Two years back, Royal Caribbean paid $1bn for Silversea and assumed $500m in debt, based on an enterprise value of $2bn.

If Lefebvre had been the sole owner during this pandemic, things would have been 'much worse' with severely restricted access to capital. Royal Caribbean has successfully navigated that and now has adequate liquidity to go at least 13 more months in a no-revenue environment, according to a William Blair research note.

'So I've been a very relaxed man,' Lefebvre concluded.

Selling a majority stake to Royal Caribbean in July 2018 had been the right move anyway. The industry was consolidating, shipyard capacity was constrained and newbuild prices were climbing. Joining RCL gave economies of scale, accelerated growth and enabled the brand to retain and grow its market share.

Still, 'Silversea is my baby. It's my love,' Lefebvre said, so it was hard to give it up after 25 years.

'If I would have been 45, I would have continued, but there's a time when you realize the business belongs in a more mature environment, a less pioneering environment than it has been with me.' He hopes, though, the brand will 'keep the same spirit, which is very much of a family company.'

After going from family ownership into a public corporation, 'It's a big change, so it's time for stability,' Lefebvre said, referring to the leadership team. 'I'm staying, Roberto's staying, Barbara's staying.'

There's no discussion of moving the headquarters from Monaco, which is convenient to the shipyards. It's also going to take time to integrate all the IT and reservations systems. Regional offices, including the one in Miami, continue. Royal Caribbean stopped building its third office tower at PortMiami so there isn't space to move anyone there anyway.

Lefebvre said he'll keep chairing Silversea, unpaid, 'for the pleasure of contributing to this fantastic brand that I love' and 'for the people who have supported and trusted me, and all the guests who have been loyal to Silversea and the travel agents. That's why I continue, as long as I can make a real contribution.'

Lefebvre was heading to Ancona, Italy, on Tuesday to check the progress of Silver Moon. Its delivery had been planned this month before Italy's shipyards temporarily shut down during the COVID crisis there. Fincantieri hasn't given a new delivery date but awhile back Silversea set Oct. 2 for the new inaugural sailing.

The recently delivered Silver Origin is en route to Tenerife, bound for the Caribbean, Panama and, ultimately, Manta, Ecuador, where the flag will be changed from Bahamas to Ecuador, probably in about three weeks. The first Galápagos sailing is still targeted for Aug. 22.

Two godmothers are on standby — Italian winemaker Gaia Gaja for Silver Moon and an undisclosed godmother for Silver Origin.

One more ship upgrade, for Silver Wind, remains in Project Invictus. The work should be taking place now. No new date has been agreed.

After Royal Caribbean bought into Silversea, two vessels in a new Evolution class were planned at Meyer Werft, with the first expected for delivery in 2022. That's put back and, given the current circumstances, there's no rush.

The design is nearly completed, though. Lefebvre described a 'good, energetic, significant evolution.'

A big reveal was planned for this October, but that's postponed, likely until April or even October next year.

The focus now, of course, is restarting service.

Silversea will benefit from the 'Healthy Sail Panel' of experts assembled by the Royal Caribbean Group.

Muckermann said Silversea expects to deliver any new procedures while maintaining the trademark Silversea experience. She pointed out, for example, that buffets are already served by waiters.

And Lefebvre is convinced that Silversea will be able to offer 'not only a good product, but a very competitive one compared to hotels, etc., because we can guarantee a controlled environment.

'In a hotel, people come and go. You don't know where the staff goes to sleep. On a cruise ship, they stay on board. We can also provide suppliers for excursions which will have to match certain rules.' The health aspect will be integral to cruising and superior to what hotels and resorts can do, similar to how cruising is superior when it comes to security, he said.