A look inside (and outside) the 'new' Star Breeze 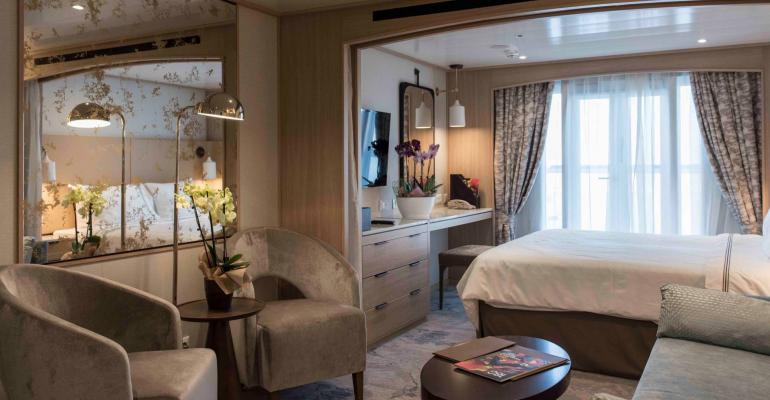 One of the new classic suites on Star Breeze, with the bed located beside the window, a different configuration

It's been a long time coming, which made today all the sweeter.

Thirteen months ago the final welding cut severed the two halves of Star Breeze and a new 25.6-meter/84-foot midsection was glided into place.

It was heralded as the most complex cruise ship lengthening ever undertaken because it also involved a re-engining and a 'complete transformation' of the 1989-built ship (the former Seabourn Spirit).

Things got more complex due to asbestos removal, then Italy's shutdown for the COVID-19 pandemic which halted work at Fincantieri's Palermo yard. And it was decided to add new health safety features including HEPA filters and UV-C light to the HVAC system as part of Windstar Cruises' 'Beyond Ordinary Care' program.

Today, at last, the completed vessel was handed over, and Windstar President Chris Prelog — who was VP fleet operations when the project began — was all smiles as he raised a toast during a virtual tour and sail-away for media.

'The lines of the ship have so improved. She looks so sleek now, so modern,' Prelog said as he showed the latest photos.

The Star Plus Initiative added 'amenities we know our guests want,' Prelog said, while the vessel is still 'small enough to travel the narrow waterways and visit the small ports we’re known for.'

Two standout features are an alfresco barbecue spot by grilling guru Steven Raichlen and a Spanish small plates restaurant by Anthony Sasso, one of the youngest chefs to earn a Michelin star.

Both were on the Zoom and Raichlen called his 85-seat Star Grill 'a dream come true,' while adding it's also a challenge to offer barbecue on a ship because 'one has to be very careful about smoke and flame.' He promised everything from Carolina pulled pork to Kansas City-style ribs, Thai chicken satay with peanut sauce and even double-smoked potato salad and smoked coleslaw.

'You name it, we grill it,' Raichlen said.

Sasso's Cuadro 44 will feature dishes with whimsical elements, like mussels seasoned with scallion ash, tortilla española with potato chip gremolata and churros dusted with hibiscus. The venue seats just 38 — 'perfect for me. I like those small settings,' Sasso said, adding there's an open kitchen.

Plus, the main Amphora restaurant was relocated and enlarged, while the Veranda restaurant, for breakfast and lunch, has more outdoor and ocean-view seating. It transforms at night into Candles, a by-reservation steak house under the stars with a new menu including a 40-ounce beef bone-in ribeye tomahawk steak and a 30-ounce bone-in porterhouse steak, both Linz Heritage Certified Black Angus, carved tableside.

'Our culinary is continually evolving,' said Windstar's Peter Tobler, director of hotel operations. The focus is on global flavors that are 'bold and sophisticated.'

Other Star Breeze changes include an enlarged spa and fitness center with sauna and steam rooms and a larger upper-deck pool and hot tub plus expanded outdoor areas for relaxing and sunbathing.

The new pool can be accessed from the upper or lower of the top decks and has a waterfall feature, with special lighting. The upper deck holds the new Star Grill, shaded beneath a canvas roof opposite the Star Bar, making a 'beautiful space to be outdoors,' Prelog said. The Windstar concept has always been 'really outdoorsy,' he added, but now that's enhanced with the additional outdoor dining.

The 50 added suites include categories like the classic suite with bed near the window, a new configuration for the ship, and a pair of larger owner’s suites that can expand into a three-bedroom, two-balcony suite thanks to connecting rooms. Every suite on board has an all-new bathroom.

The lengthening improved the hull efficiency and with the new. highly efficient Wärtsilä engines and diesel generators, Star Breeze is faster and quieter, with less vibration.

There's a new elevator mid-ship, accessing all decks, and a comfortable tender loading area mid-ship and two new 90-passenger tenders. Staff and crew areas and accommodations were expanded and upgraded, too.

But where will Star Breeze sail?

Star Breeze is scheduled to enter service March 27 in the Caribbean before transiting the Panama Canal to sail in the Sea of Cortez and then Alaska on 10-  and 11-day cruises. However, the US Centers for Disease Control and Prevention's framework for conditional sailing states itineraries shouldn't be longer than seven days. This means a possible redeployment scenario, Prelog said. Things should be decided in a week or two.

The $250m Star Plus Initiative spans three ships. Next up, Star Legend has already been cut in half, gained its new midsection and was floated out at Palermo today, while Star Pride is set to enter the drydock in January.

Despite the project's extra time and expanded scope, Prelog said the cost is within initial projections, 'because you plan for bad weather,' as he put it. The 'Beyond Ordinary Care' program, however, is a multimillion-dollar addition.